Cold To The Touch 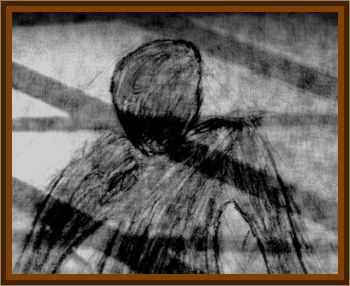 I had been on my computer late one night. Around 11:50 p.m. to 12:10 a.m., chatting and just browsing the net when I heard a creak from the top of the stairs behind me. I figured it was my mom getting ready to tell me to get to bed as she tended to do when I was up late online.

Anyways so I just shout back before she can say anything:

Well I turned off the computer, got up and went to the stairs. My stairs didn't go straight upstairs but instead have a landing and then turn and then go upstairs. So when I got up to the landing and looked upstairs, it was semi-dark, I could see this shape, a figure of someone standing up at the top of the stairs and then it walked off without a sound out of my sight towards where the bathroom and my parent's bedroom was.

At the time I just shrugged it off as my mom waiting to see if I really was going to get off the computer. So I got upstairs and walked past my parents' bedroom on the way to the bathroom. I found it somewhat odd that my mom was already looking rather comfortable and looked like she was sleeping already, but I shrugged it off and kept walking.

I opened up the door to the bathroom, It was partially open, and there standing not two feet away from me was this black figure. Blacker than black, and just a presence that chilled me to the bone. I put my hand out to see what was there, to my surprise my hand passed through it. My hand went bitter cold and every hair on the back of my neck rose.

At this point I was ready to freak, I quickly rose my left arm to hit the lights and as my arm was on it's way up the figure leaped at me, and I heard this voice say:

When the lights came on, even though it was in mid leap, and right in my face, it vanished. Gone, without a trace.

The next night I walked into the bathroom expecting to see it again, but I was then pleasantly surprised to find that it wasn't there. Just the pitch black bathroom with a slight light coming in from the window. So I turned on the light, and when I turned on the lights, I realized that where the light was coming from, was not where the window was. I cannot explain where that light was coming from.

Lastly, on the third night I just woke up in the middle of the night. I was laying on my side, and I figured I would get up and use the bathroom. So I open my eyes, and crouched there, next to the bed was this black shape once again, crouched, just staring at me.

Out of instinct my fist flew out but I hit it (once again, my hand went through it, turned ice cold... like I felt my hand afterwards and it was freezing), and it actually ran out into the hallway with this sort of whispering kind of laugh. Really eerie, I don't know how to explain it. So I chased it out into the hallway but it was gone.

The entire time I had kept all of these stories to myself. I thought it might have just been my imagination or some crap. Well, that next day I overheard my mom asking my dad if he had seen anything weird, and then she told a story about how there was this pitch black, shadowy figure staring at her through their bedroom window, and how she had to turn the water off in the bathroom for the past two mornings.

The feeling of terror and realization I felt then... I will never forget that.

I had never told them anything prior to that, and apparently they had both had strange experiences within the same three day period. My dad had something crawl onto him while he was in bed. Thing is... we never told each other until that last day.