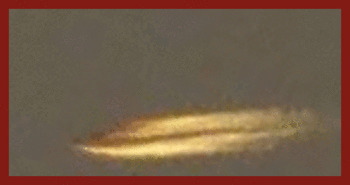 It was a very strange object. It was total different from anything I saw before and after.

This UFO was not just light it had a form and shape and was made of a gold like metal, probably it was gold.

The shape of this UFO was airship like, cigar shaped, but it had no surface. It appeared constucted from massive metal rods like a cylindric cage. It had a nose and tail.

The nose was like a cone of spikes and these spikes formed the body.

It flew at medium height and not very fast just straight forward. I heard no sound and did not see any engine, but it had some moving parts.

There were no people on board. I can't remember more details of this object because I was very young at this time, and had seen it only short time.

The building in front of me had obscured it. The weather was good on this day.