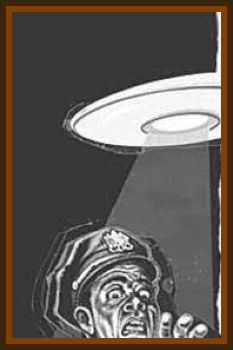 Manuel Amparano talks about the sighting of an unidentified flying object at 3:32 a.m. May 13, 1978, as if it happened only days ago.

Coming face to face with a UFO creates vivid memories.

Amparano’s sighting is one of the most detailed of the many accounts of UFO sightings in the Fresno area documented over the years in The Fresno Bee and on web sites.

The Fresno resident was working as a Kerman police officer.

It was just a routine patrol, Amparano says of the encounter 24 years ago. His early morning sweep took him past Kerman High School.

At Del Norte and California avenues, Amparano saw a circular type thing, similar to a round fireball or a setting sun, about 100' to 150' off the ground.

He knew local teens had been setting palm trees on fire, and he thought he had caught some young vandals red handed.

Then I realized there were no palm trees in the area. The fire seemed to be inside of an oak or maple tree.

The officer started adjusting the spotlight on his patrol car to get a better look at the object. But just before he turned on the light, there was a bright blue flash. Then the object made a sharp turn and moved away toward the southwest at a rapid speed.

Amparano had not left his car. And the windows were rolled up because it was a cold evening. He did not hear any other noise except for the engine of his car.

The Air National Guard, weather bureau and the Fresno Air Terminal told Amparano nothing unusual showed up on any of their radar screens that night. The encounter might have been dismissed as an optical illusion, if not for the burns Amparano suffered on his face and chest.

It was like a sunburn when you fall asleep at the pool. There were white blisters on the parts of my body facing that light. I also had trouble with sunlight. It was like right after you have your eyes checked and they are sensitive to light. That lasted about a week, Amparano says.

Doctors at Fresno Community Hospital told Amparano the burns appeared to be caused by microwaves. An immediate search of the cotton field where the sphere had been sighted revealed no evidence.

But for years, nothing would grow in a round area in the field. Today the spot is part of an almond orchard.

Amparano went back to work a few days later. The only after effect of the close encounter was calls from a lot of women who wanted to have lunch and dinner with me.

He continued to work in local law enforcement until 1992, when he was hurt while breaking up a bar fight.

He’s had more than 2 decades to think about that glowing sphere. Amparano is certain it was a UFO.

What I am not certain about is whether it was some kind of government project or something from out there, Amparano says.