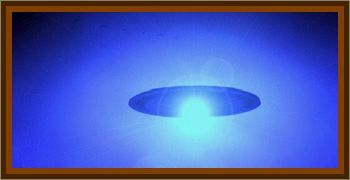 when Pedro Serrate was walking along the banks of the river Guapore when he saw the object some 160' from him, and it approached to within 10' of his position, making no sound.

The thing was disk shaped and Pedro estimated its dimensions as 13½' long, 8½' wide and 6½' in height. The hull seemed to be made of some kind of material resembling glass and was supported by metal beams in the material. It was of a dark blue color and in the rear and on each side, there were curved tubes some 5" thick from which water was emerging. From the time he spotted the thing until it reached its nearest position to his location, it had circled around over the river just above the surface. When close, he noted 6 people, four of whom he assumed were men and two women, all of whom appeared no more than 20 years of age. They appeared to be of medium height and had blond hair and rose like, or pink complexions. All were dressed in outfits which were the same color as the ship, and when they became aware of Bessa’s presence, the ship immediately ascended into the sky and was out of sight shortly.