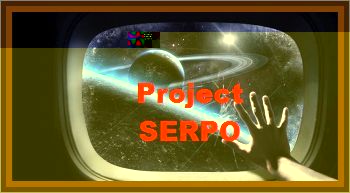 One of the most fantastic and controversial contacts is that surrounding Project Serpo. There is still much speculation as to whether this is a genuine Top Secret project or an elaborate hoax, however its supporters point to the authenticity of the data provided by the anonymous source, by validating many facts that are not in the public domain. If the source, a retired senior official within the U.S. Defense Intelligence Agency, DIA, is to be believed, following the 1947 Roswell incident, in 1964, the US military sent a team of 12 scientists to a far away planet in the Zeta Reticuli system at the invitation of its inhabitants, The Eben.

According to the source, one of the aliens, from the Roswell crash survived and was taken to Sandia Army Base, Albuquerque, New Mexico before being moved to Los Alamos. In time, the U.S. military permitted the Eben visitor to communicate with his home planet and this developed into a dialog between the two planets. The surviving Eben apparently died in 1952 but communications continued, and in 1965, an exchange program was established between Earth and the Ebens home planet.

It took the team 9 months, traveling in the alien craft to reach their planet, which the U.S. Military named Serpo. Although they had problems acclimatising to their new environment, the team actually remained there for much longer than the 10 years the mission was originally scheduled for, finally returning in 1978. The team consisted of 2 doctors, 3 scientists, 2 linguists, 2 security personnel, 2 pilots and was lead by an Air Force Colonel.

An Update to this Story

The crash involved two extraterrestrial aircraft. The Corona site was found a day later by an archaeology team. This team reported the crash site to the Lincoln County Sheriff's department. A deputy arrived the next day and summoned a state police officer. One live entity [EBE] was found hiding behind a rock. The entity was given water but declined food. The entity was later transferred to Los Alamos.

The second site was not discovered until August 1949 by two ranchers. They reported their findings several days later to the sheriff of Catron County, New Mexico. Because of the remote location, it took the sheriff several days to make his way to the crash site. Once at the site, the sheriff took photographs and then drove back to Datil.

The live entity established communications with us and provided us with a location of his home planet. The entity remained alive until 1952, when he died. But before his death, he provided us with a full explanation of the items found inside the two crafts. One item was a communication device. The entity was allowed to make contact with his planet.

Somehow, I never knew this information, but a meeting date was set for April 1964 near Alamogordo New Mexico. The Aliens landed and retrieved the bodies of their dead comrades. Information was exchanged. Communication was in English. The aliens had a translation device.

In 1965, we had an exchange program with the aliens. We carefully selected 12 military personnel; ten men and two women. They were trained, vetted and carefully removed from the military system. The 12 were skilled in various specialities.

Near the northern part of the Nevada Test Site, the aliens landed and the 12 Americans left. One entity was left on Earth. The original plan was for our 12 people to stay 10 years and then return to Earth.

Twelve team members went, and eight returned – two having died on Serpo and two having chosen to remain; these two were not ordered to return.

The returnees were isolated from 1978 until 1984 at various military installations. The Air Force Office of Special Investigation (AFOSI) was responsible for their security and safety. AFOSI also conducted debriefing sessions with the returnees.

During the trip, each of our team members were frequently dizzy, disoriented and suffered headaches. The craft did not go through any weightlessness during the trip. The craft was very large and allowed the team to exercise.

Once the team arrived on the Eben planet, it took them several months to adjust to the atmosphere. During the adjustment period, they suffered headaches, dizziness and disorientation.

The bright suns of the Eben planet also presented problems. Although they had sunglasses, they still suffered from the bright sunlight and the danger of sun exposure. The radiation levels of the planet was a little higher than that of Earth. They were careful to cover their bodies at all times.

The Ebens had no forms of refrigeration, except in industry. The temperature of the planet, at the center portion, stayed between 94° and 115.° They did have clouds and rain, but not frequently. At the northern hemisphere of the planet, the temperature dropped to between 55 and 80 degrees. This was too cool for the Ebens, or at least most. Our team did find Ebens living in the north, but in very small villages.

Our team eventually relocated to the north in order to stay cool. The ground transportation used by our team was similar to a helicopter. The power system was a sealed energy device that provided electrical power and lift for the craft. It was very easy to fly and our pilots learned the system within days. The Ebens did have vehicles, which floated above the ground and did not have any tires or wheels.

Every Eben was issued what they needed. No stores, malls or shopping locations. There were central distribution centers where Ebens went to obtain items of needs. All Ebens worked in some capacity. Children were kept very isolated. The only trouble our team members got into was when they attempted to photograph Eben children.

The Army politely escorted them away and cautioned them not to do it again.

There were about 100 different villages or living locations for the Ebens. The Ebens only used a small portion of their planet. They did mine minerals in remote areas of the planet and had a large industrial plant in the southern portion of the planet near a body of water. Our team determined this plant had some sort of hydroelectrical operation.

Our team's living quarters, which consisted of several small buildings, contained electricity powered by a small box. This small box supplied all the power our team needed. Ironically, the electrical equipment our team brought on the trip worked using their power source only.

Our scientists questioned our team members and the information they gathered. Our scientists could not understand how the orbit of Serpo could revolve around the two suns at the distance measured.

In the end, our scientists found that some things relating to that particular system was different in physics compared to our system. There were some questions about how our team measured the orbit and other calculations based on the lack of a stable time base. For some reason, and I don't think this was ever determined, our time instruments did not work on Serpo.

So you see, our team did the best they could with the instruments they had and the hardships they developed attempting scientific calculations. It is difficult for any Earth-based scientist to understand the different physics in other solar systems or on other planets.

Serpo moved around one sun only. The other sun was within the two orbits.

The Ebens did warn us that several other alien races within our galaxy were hostile. The Ebens stay away from those races. The debriefing document never stated the name of the enemy.

How did the Ebens advance so quickly? Nothing was written about this. But Earth-based scientists surmised that since the Eben culture consisted of just one species, their advancement excelled and accelerated more rapidly than a civilization that consisted of different species, different languages, etc.

As to the Eben culture: They had a form of musical entertainment. The music sounded like tonal rhythms. They also listened to a type of chanting. The Ebens were dancers. They celebrated certain work periods with a ritual dance. The Ebens would form a circle and dance around, listening to the chanting type of music. The music was played on bells and drums, or something similar to them.

Athough the Eben civilization had no televisions, radios, etc., each Eben had a small device belted to their waists. This device gave orders to perform a particular task, news of pending events, etc. The device displayed a screen, similar to a television screen but in a 3-D style format. Our team brought back one of these devices. (I think today, we could compare it to a palm pilot).

The debriefing reported that the Team Members who remained, did so voluntarily. They fell in love with the culture of the Ebens and the planet. They were not ordered to return. Communication with the remaining crew members lasted until about 1988. No other communication was received from those Team Members. The two, who died on the Planet Serpo, were placed in coffins and buried. Their bodies were returned to Earth.

Each Team Member received a large dose or radiation during their stay on Serpo. Most of the Team Members died later of radiation-related illnesses.