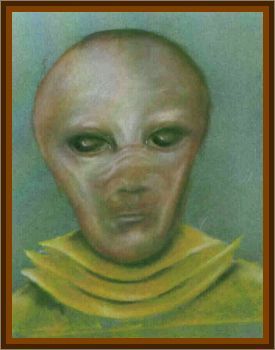 The Night Sky is not certain of the validity of the following, but it is interesting reading.

Being directly involved with Operation Tango Sierra, involved the finding, tracking and eventual capture of an extraterrestrial entity.

The original operation began in early 1980 when an Earth female was identified by U.S. intelligence as being a so called alien abductee. She had been abducted by a male non human in 1977, it was her first abduction.

The male non human showed the abductee projections of alien life on another planet. The projection was from a small, triangle device. The woman viewed this projection which she described as images displayed in a 3 dimensional holographic view.

The non human entity never harmed the Earth woman abductee. During the 3 years of her ongoing abduction, the Earth woman was taken by the entity through a veil of light to another place. The abducted woman described this place as being a light bubble. She would sit inside the bubble and view these holographic projections with the non human entity.

On one occasion, the entity introduced the abductee to another male entity, which the abductee described in debriefing details as not being human, not being an Earth male abductee. The Earth woman called this other being a creature.

This creature performed a medical examination on the woman. The woman didn't fully consent to the alien's examination as she was temporarily paralyzed. After the examination, the woman was taken back to her residence. This woman was a single, 23 year old and a trusted, well respected U.S. government employee.

When the abductee brought up her abduction by a male alien to the attention of a co worker, the co worker contacted an office security official, who then contacted U.S. intelligence officials. U.S. intelligence spent hours and hours vetting the woman's story, conducting thorough background investigations, performing surveillance, and administering several polygraph examinations. Her story was eventually deemed to be factually true and correct. U.S. intelligence then mounted a very special, highly classified operation to capture this entity, who lived near Landover, Maryland.

In early 1980, the 7602 Air Intelligence Wing, Section III, began a detailed, intense investigation involving the presence of extraterrestrial creatures having infiltrated the highest levels of the United States government. This information originated from several abductees, who underwent extensive screening to determine their credibility. One particular female abductee, who lived in the Washington D.C. area, provided a very believable, credible sounding account that she had been abducted by a human looking man, an extraterrestrial entity, who actually resided in the Landover, Maryland area.

With the assistance of the 4th District, the Air Force Office of Special Investigations, AFOSI, a highly classified operation was launched, code named: Operation Tango Sierra, to find, detain and debrief that human and determine, whether or not he was an actual extraterrestrial creature or non human and an imminent or potential threat to our national security.

The entire operation lasted 5 months and involved approximately 60 intelligence officers. Every intelligence gathering capability was utilized at the time. Ground, aerial surveillance, telephone wiretaps, photographic evidence and other undisclosed clandestine operations were all conducted and some simultaneously in concert with one another.

The non human entity was quickly identified, carefully watched, photographed and eventually captured near a shopping mall southeast of Andrews Air Force Base, Maryland, after it walked up an embankment. It was quickly determined that this male entity had no special powers nor abilities. The male non human voluntarily complied with the U.S. intelligence AFOSI Special Agents and went quietly and without incident. The male non human was then remanded to custody and placed in captivity at Ft. Belvoir Army Post, VA.

The male non human was interrogated by teams of AFOSI Special Agents over several weeks and in total was questioned and intensely interrogated for many months by other agencies.

It was during this time that the male non human disclosed its race, its home planet and the reason it came to Earth. The entity basically cooperated and provided details of its life on his alien home world.

The non human entity was released on the direct orders of then President Carter in late 1980, and subsequently left Earth and returned to its home planet.

The male non human originated from the star system Delta Pavonis, 19.92 light years from Earth where it was the 4th planet from their sun. It is roughly the same size as our Earth.

The captured alien was labled as an Septeloid. That was the identifying alien species name given to them by the astrobiologists on the team. There is no clue as to why they picked that name as well as some of the other odd sounding alien species names ending with the suffix of loid.

The suffix oid is used in various sciences meaning: Having the likeness of, so it is similar, which indicates that the thing is not identical to another, but resembles it, an anthropoid.

The travel time to Earth was 18 Earth months using a very complex propulsion system and Time Space Displacement travel mode. Back then in 1980, scientists could not understand the alien propulsion system, and never saw his spacecraft.

When President Carter let the entity leave, he just vanished. I was never in the intelligence loop as to how he left or how he departed Earth. These aliens from Delta Pavonis have been visiting Earth for some 100 Earth years. Apparently, they could assume a human likeness, and easily live among us.

The team is not sure how they learned English so well, nor other languages. You've got to remember that this was extreme compartmentalization. We knew just what we were suppose to know. There is much more to the alien debriefing that we do not know. From what was learned over the years, this race of alien beings originally came to Earth as explorers about a century ago.

With respect to the entity's employment, he worked as a records keeper for the U.S. Dept of Commerce in Washington D.C. He was able to manufacture his own identification documents by assuming that of a deceased human. He was in a career that didn't require a high level security clearance, thereby enabling him to escape the much greater scrutiny given to secret clearance level background checks and above.

Although they possessed the human shape, form and basic anatomy, they were not human beings like us. Their actual, normal, real appearance was that of a hideous looking creature that would most certainly scare, frighten and terrify a normal person.

Above all, they did not have any extra sensory powers or abilities. They had no weapons and never tried to harm humans. Their sole intent and stated mission was that they just wanted to study us, and obtain the basic structure of the human body, anatomy and social interplay. It's not known how many others of this specific type of aliens were among us as that is specific highly classified information.

However, it's possible that there were more similar type operations than just this one. Operation Tango Sierra was just one operation that lasted 9 months from start to finish in the D.C area. U.S. intelligence had more such operations around the U.S., with one in the southwest and another in the northwest, but exact the location details are unavailable.

Thay can't be answered, for you are relying on information from outsiders, the UFO community, who do not know what the U.S. government intelligence agencies know and specifically what they were doing while handling alien contact.

As for other visiting alien races, we knew of 9 of them. The Ebens were the nicest while the Trantaloids were the ugliest, meanest and most dangerous.

The CIA/DIA/NSA were all involved as well as one 1 or 2 FBI Special Agents, but they were never fully briefed. The lead agency was the 7602nd that operated out of Ft Belvoir. Those guys were the best of the best. I was the lead case officer for the surveillance part of the operation. I was very good at that. I was trained by the best and worked inside the old Soviet Union for many, many years.

I could follow the devil around and he would never know it. Most of the UFO operations, clandestine that is, were performed by the 7602nd. In fact, the CIA came to them for their specialized training. The 7602nd Air Intelligence Wing remained secret for many years. Although it was a U.S. Air Force unit, the unit contained all branches of the armed forces except the Marines, we never could train those guys.