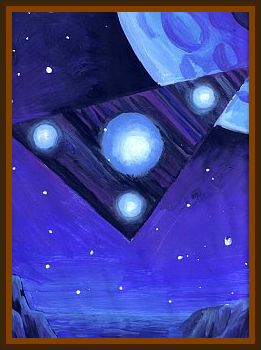 A couple in the car observes a luminous circle turning on itself and the edge of which lights are evenly laid out.

The car leaves the city quickly but a little further finds the phenomenon in front of the vehicle, a triangle with the same type of light on the circumference came to be added to the circle.

The triangle is equilateral 30' per side approximately and altitude from 30' to 45'. The phenomenon accompanied the vehicle which ran to approximately 80 km/h while adapting at the speed and that on several km.

During a change of direction the object accelerated and moved away, the witnesses then specified that it had the shape of a boomerang. In the same time crenel, and on the same road, another couple in another car describes the phenomenon with a similarity of terms, completely surprising and described the same evolutions compared to the vehicle. This phenomenon could not be explained.