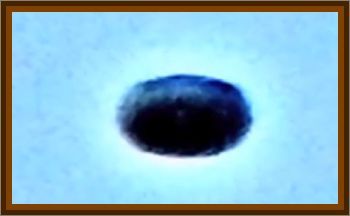 At approximately 9:30 p.m. I left the ARCO convenience store at the southwest corner of Fauntleroy and SW Alaska St., and noticed the object while facing east. It was sitting/hovering over towards the golf course and club house.

Later at the clubhouse he revised this comment to say that it was probably not over the clubhouse but in a clearing between the highway and the golf course to the right of the clubhouse, an area some 500 yards long and 100 yards wide.

It is important to note that if the UFO had been near the ground in this area it would have been hidden from view to the south by trees, to the north by the West Seattle high school stadium, and from 35th S.W. by a hill.

It was huge, I don't know what a mothership is, we get our terminology from TV, but it was like a mothership, it was big.

Later at the intersection he described the size of the object as stretching from a rotating motel sign on the left to a tall evergreen tree on the right, a distance that would be covered by 3" of a ruler held at arm's length.

His estimate on the report form that the apparent size of the object was as large as a 12" ruler held at arm's length was therefore an exaggeration.

I shouted back and called my girlfriend's attention to it. It moved to the left, then to the right, then it moved away and up until it was out of sight.

While we were watching it we stood in the middle of the intersection and nearly got run over by two or three cars. One guy who almost hit me honked and said:

No man, look at that.

He stopped and said:

Is someone hurt? And then he saw the object.

He saw it while it was in motion. We watched it until the damn thing disappeared. The other witness, a guy 25 to 30 years old, heavy build with a blonde mustache, 5'9" to 5'11", well dressed in sweater and slacks. said:

No, I've been watching it for about 30 seconds.

I didn't hear anything like a hum or a buzz like you would get from an airplane. There was nothing.

When questioned about his note on the sketch made earlier that said humming sound:

I heard a humming sound like the electric/cooling fan on a car after the engine is turned off, but it was probably the car of the guy who stopped. I'm almost sure the sound didn't come from the object.

The other guy said he was on his way to Jake O'Shaunnessy's Restaurant to meet someone and had to get going. I said I was going to go down to the golf course and check that out.

I went down to the clubhouse parking lot, there were only two cars there, parked in front of the clubhouse. I didn't see anything more unusual there.

The stadium lights were on at the West Seattle High stadium there at the park.

The first thing I thought when I saw it was that it was a carbon arc/searchlight, and I was looking around first for a carbon arc searchlight to see if there was some source of the light. I used to be a projectionist and used to work on the carbon arc. You could project the pictures on the clouds with one of those things if you wanted to. But it was definitely a physical object.

Asked about the weather conditions that night:

There was a full moon that night. The moon looked huge that night. It was clear, there were sparse clouds but not en masse so you couldn't see the sky.

I hadn't been drinking and I don't do any drugs.

Asked about his line of work:

I run a shoe repair concession with two other men in the Nordstrom's Men Shoe department, and I'm a parttime musician, percussion and piano.

Asked about his familiarity with UFO literature:

We saw the Betty and Barney Hill movie, I used to watch a TV series in the 60s called Project Blue Book, one of my favorite movies is The Day the Earth Stood Still, and I read Shirley MacLaine's book "Out on a Limb.

Asked about a description of the object:

The object was metallic blue color. It was shaped like this:

Makes an ellipse in the air with his two hands.

The first three paragraphs are a narrative from a phone interview with this witness on Friday, March 11th:

While crossing the street with my boyfriend from a corner 24-hour convenience store we saw a huge, metallic spherical shaped object surrounded by a bright blue light over the West Seattle golf course and Camp Long. The object was as wide as a football field is long. We heard a humming sound, and estimated it to be only 300 yards above the golf course.

We were nearly knocked down by a car because we were standing there in the middle of the street kind of mesmerized by the sight of such a strange object so close to the ground. The driver of the car pulled over and stopped. We watched the object together for about 30 to 40 seconds. It moved very quickly right, then left, in sort of a zig zag, and then it was gone.

I'm in my thirties and I work as a transit operator for Metro, the regional bus system. I've never seen anything like it despite driving buses late at night for many years.

After the sighting we discussed the sighting with the other man and we decided not to report it. Later on I decided that we ought to report what we had seen to someone, and I looked up UFO in the white pages and found the number for the UFO Reporting Center and called it. I'm sorry now that the other witness drove away before we could get his name. We called to find out if anyone else had reported it and were surprised to hear that no one else had.

I was still in the store when he saw the object from the sidewalk. I don't know how long he'd seen it before he yelled at me. But when he got my attention he pointed over in the golf course direction. I saw it when it first started to move. When it moved up, it moved sort of away. I guess east. The more we talked about it the more we felt that we should call somebody. I called the UFO Reporting Center late on Monday morning. I wanted confirmation that:

Yes, we did see this strange object, because other people saw it, too.

He went down to the golf course, I just went home. I have a two and a half year old and he was asleep in the car and I didn't want to get too close.

My parents are Jehovah's Witnesses and they have a religious interpretation for these things, they say that they are spiritual manifestations.

The notetaker missed some of what the parents explanation was at this point, however, the gist of what she said was that she was skeptical of her parents interpretation.