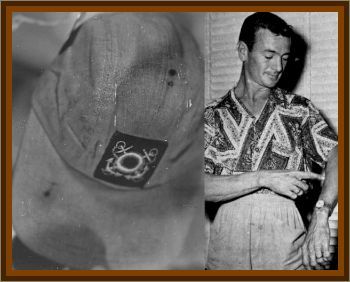 D.S. 'Sonny' Desvergers, a scoutmaster of Troop 33, reported observing an unusual object about ¾ of a mile south of the Lantana Road/Military Trail intersection, while taking 3 scouts home.

Driving south on Military Trail, at about 40 mph, with the radio up pretty loud, I saw this little blur of light headed toward the ground at about a 45° angle, in a north to south direction. The light started at about 2000' and I watched it at intervals until it got to the ground and trees, and was out of sight. The lights were fuzzy or hazy with no particular color, they were just white. There was a series of lights, about 7 or 8, but they were all blurred. It could have been a plane crash, although we didn't hear any noise above the radio. I got a pretty negative reply from the boys as to the lights. They were frightened and scared, I shouldn't leave them by themselves. I considered that and we drove on. About 600' farther down the road, 12 year old Bobby Ruffing saw the same lights. Then the other boys looked and they saw them. I turned the car completely around on the road and went back about 700' to where I thought the lights were behind the trees. Still thinking this was a possible plane crash, I told the boys that if I wasn't back at the car in 10 minutes, to notify the sheriff and to then call their families and tell them that they were O.K. under the circumstances. They understood thoroughly and I proceeded into the woods with two flashlights and a machete.

I walked approximately 1000' in cleared ground through trees about 20' high, then went through thick palmettos about 500' and came into another clearing where there were all small pine saplings. When I stepped out into this clearing, I shined the light on the ground thinking it might be a lake bed, to make sure it was dry land. I went another 45' into the clearing. I then felt the presence of something that shouldn't have been there, it was a hot sensation, just like walking into an oven. I could feel a little cold sweat pop out on me. Whether or not that was from being scared, I don't know. But I know that I was in the presence of something or somebody. I shined my light around, not seeing anything. Then I realized that the heat was coming from overhead. I shined the light up and saw a flat surface of a round object about 35' in diameter, about 10' above me. I guess I was absolutely paralyzed, I could not move a muscle, I was scared to death. It must have been a good minute that I was under this thing. I wanted to run but my feet just wouldn't work. I realized there was something abnormal about this. I had my machete in my right hand and my searchlight in the other hand, still on the object above me. I wanted to strike it with the machete, or throw the flashlight at it, but somehow I just couldn't do it, my reflexes wouldn't work. Then I slowly backed out from under, a couple of paces at a time. It seemed like an eternity. I got to the edge of it and I saw that the lower trailing edge was of a shiny nature, like phosphorescence in salt water at night. It wasn't dominant but it was off and on. The thickness at the edge was about 3', with port holes, exhaust ports, or openings continuously around the edge of it. I backed up a couple of more paces and I could see a dome or the top, against the sky. This thing never made any noise other than a slight hissing sound, similar to air escaping from a compressed area. I didn't hear any motors. Whatever, it was absolutely suspended in midair with positively nothing touching the ground. Then I heard a sound similar to a hatch being opened, that is the only other sound that was outstanding. There was a slight bit of jabbering, it seemed like in the distance, which could have been the boys in the car.

A ball of red fire came in my direction from the top of this object. It had no speed but seemed to float right straight for my face. I was still immobile, I couldn't move. I wanted to but I just couldn't make my legs move. I did finally drop my flashlight and threw my arms up over my face and got the full impact of this red flash. It wasn't a solid substance, it felt more like a hot gush of air or something, blinding me momentarily and smelling something awful, worse than burning flesh. The only visible damage was that it singed the hair off both of my forearms and burned a few holes in my cap. There was just a tingling sensation as if my arms were trying to go to sleep. I slowly began to black out or pass out. I fell to the ground and was probably out about 25 minutes. When I regained consciousness, I was not at the same spot where I passed out. I was still dazed or shocked or scared, and still smelled this awful smell. I immediately tried to get back to the car. I had no light but still had my machete. A deputy sheriffs car was parked on the side of the highway. I tried to call him or holler for help several times after I came to, but the sound just wouldn't come out, I didn't make a sound until I got almost to the edge of the road. Then I saw the deputy and knew I was safe.

Bobby & the other two boys, Chuck Stevens & David Rowan, testified later that while waiting in the car about 1500' away during the incident, they saw various lights, and even the scoutmaster, among the trees. Bobby said:

The whole area lit up red. We got scared and ran to call the sheriff.

The scoutmaster & investigators who returned to the site found his spotlight lying on the ground, still on, but were unable to find the other flashlight. The FBI examined the scoutmasters cap, damaged during the incident, and reported that there was no residue of whatever burned the holes found in it. A 4th hole, in the sweat band, did have the residue of a charred ember. The report does not say the holes were made by cigarette burns. The scorch marks on the cap were not present in the folds of material on the outside of the cap, indicating that the cap was probably not being worn while it was scorched. The FBI report also notes some minute holes which are not obvious and states that these might have been made by an electrical spark.

Unfortunately, the background and reputation of the scoutmaster make him an unreliable witness. Of course, this is circumstantial, and hiring of a press agent later is circumstantial. The soil and grass samples taken, from the spot where the UFO reportedly hovered, indicate something extraordinary happened, when the dirt and sand were knocked off, the roots were found to be charred. The blades themselves were not damaged, they had never been heated, except on the extreme tips of the longer blades. These had evidently been bending over, touching the ground, and were charred along with the roots. The charring can be duplicated by placing live grass clumps in a pan of sand and dirt and heating to about 300°F over a gas burner. No underground springs to heat the earth, or chemicals in the soil, were found. The UFO reported in this incident was evidently radiating electromagnetically, with infrared/microwave energy heating the air underneath and penetrating the damp ground for a few inches, causing dielectric heating.