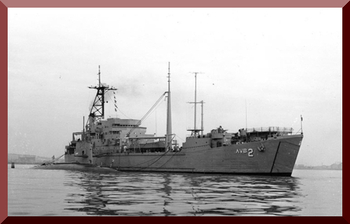 I am submitting this in hope of garnering info for myself.

In June, 1968, aboard the USS Hyades (AF-28), we were notified that the USS Scorpion (SSN-589) was overdue and the last known position report was in our area, just off the Azore Islands, Atlantic Ocean, known as the Atlantic Ridge area.

We immediately commenced a search of the area, which for us lasted 3 days and nights. We were the first ship on station and searching.

On the second night of searching, an object was reflected in the searchlight, 24" mercury arc light, I was on. I was a signalman and my duty station was on the signal bridge running the light. As the ship turned toward the object, it went out of the beam, and was lost due to darkness. It was a cloudy night with no moon or stars, pitch black.

The next day we were relieved on station by the rescue ships and continued on our way to the Sixth Fleet in the Mediterranean.

A few years later, I read about the aforementioned incident and that the object, which was lost in the beam, mysteriously lifted off the water and disappeared in the sky. Also, the sinking of the Scorpion has been attributed to the Bermuda Triangle curse.

Does anyone have any info regarding these allegations? I was involved in the actual incident and would like to hear any about any info suppossedly existing about this. I realize the time factor involved here, but it is something that has been of interest to me for many years and I have decided now to see if I could get any info it.