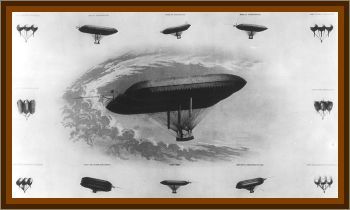 The mysterious wave of airship sightings that took place over America in 1896 and 1897 were mirrored by a series of sightings that took place in Britain, starting in 1909. One of the first of these so-called scareship sightings occurred in the early hours of March 23, 1909, when PC Kettle from Peterborough heard a strange buzzing sound from above. When he looked up, he saw a bright light attached to an immense, oblong shaped craft, which moved at a fairly high speed across the sky. Numerous further sightings were reported.

On May 13, 1909 an airship of about 100' in length was seen over Kelmarsh in Northamptonshire, while on the same night two men claimed to have seen a landed airship on Ham Common in London and spoken to the two crewmen, who they said were German and American. The German asked for some tobacco for his pipe and the two witnesses reported having been blinded by a searchlight during some of the sighting. Another report of a landed airship concerned an event that took place on 18 May 1909, on Caerphilly Mountain in South Wales. The witness reported having seen two strangely dressed occupants who he heard talking to each other in a strange language that he was unable to identify. A subsequent examination of the alleged landing site revealed some damage to the ground.

The public perception was that these were sightings of German airships carrying out reconnaissance missions. But there is no indication that Count Ferdinand von Zeppelin’s airship programme was sufficiently advanced in 1909 to conduct such operations over the UK. In any case, German airships of the period could manage nothing remotely close to the sorts of speeds and manoeuvres that were being reported. The British airship programme was significantly less advanced than the German one, so we do not believe that the scareship mystery can be explained in terms of prototype British military hardware with which members of the public would be unfamiliar. To this day these sightings remain unexplained.

Our reason for mentioning these sightings is that they mark the beginning of official interest in unexplained aerial phenomena. The 1909 wave was followed by further reports in 1912 and this is where our story begins in earnest. There had been sightings of an airship over Sheerness in Kent and with tension between Britain and Germany being so high, it was suggested that a Zeppelin was involved. On November 27, 1912 William Joynson-Hicks MP raised the matter in Parliament and quizzed the First Lord of the Admiralty about the events. The latter confirmed that reports had been received, but said that subsequent investigation had not produced any explanation for what had been seen. The First Lord of the Admiralty at the time was Winston Churchill.

Sightings continued throughout 1913 and one consequence of this was the strengthening of the Aerial Navigation Act of 1911. A Bill was duly passed which set up prohibited areas. If these were violated or if an airship failed to respond to signals from the ground, it could then be shot down and to enable this to be carried out, the War Office stepped up efforts to produce a gun capable of bringing down an airship. The War Office continued to investigate the 1913 sightings, but drew a blank.

While the media championed the theory that these sightings involved German dirigibles, some newspapers suspected that hoaxes or hysteria might be more logical explanations, especially in the cases of those reports involving sightings of landed craft and occupants. Crucially, however, the Government was not prepared to make such a judgement and continued to take the view that all sightings should be investigated. If there is evidence that your airspace is being penetrated by aerial craft one does not ignore the data.

Whatever one’s personal beliefs, anyone within government and the military cannot ignore evidence of this nature and must assume that they are hostile. If governments investigate such things and they turn out to be bogus, all they lose is a little time and money. But if they ignore something that turns out to be real and hostile, they leave the country vulnerable, as well losing the opportunity to exploit it, meaning copying the technology. This philosophy underpins official interest not just in UFOs but in other areas such as remote viewing, so in a sense the War Office response to the scareship mystery set the template for future official investigations into UFOs.

One of the strangest cases was reported in 1967, when a UFO was said to have landed in a park on the Longhill estate.

The story goes that on Wednesday, November 15, 1967, a group of Hull children saw a cigar shaped craft descend and hover over the park, leaving burn marks on a hill. Two police officers on duty visited the landing site, and noticed burn marks on the hill, but no sign of any such craft. Initially they thought the children had been up to no good but their stories were very consistent.

Other eyewitnesses across Hull described seeing a cigar shaped object flying over the city, while another eyewitness claimed it was a helicopter from the Yorkshire Electricity Board. The matter was never fully resolved.

Another one of the most credible reports involved several police officers in Hull, Hedon and Thorngumbald, who saw a light in the sky over Saltend.

A report dated October 17, 2002, details how officers saw an object which appeared as the size of a normal bright star but of different colors, blue, green, red & white, moved fast, stopped and started and changed shape. The lights began at 3:00 a.m. and were visible for around 45 minutes.

One Hull resident said the lights appeared to be communicating with each other.

Lastly, A beam of light was seen spinning around the sky on September 8, 1985. A round object was then reported to have risen from the ground. It was described as being the size of a house, with a ring of red lights around its base. A humming noise accompanied the light show. The object was seen heading east across fields flying at a height of about 50'.