I Saw a Saucer Shaped Craft on the Ground 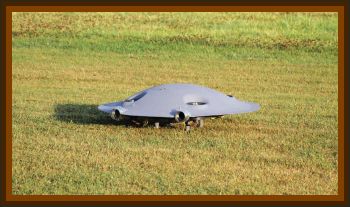 I was a young girl around 1958 when I saw a saucer shaped craft on the ground in daylight resting between two sets of power lines.

This happened a long time ago but since I have never seen a report like it, I thought it was time to get it into the record. I wish I remembered more about how old I was and the year, but my guess is I was between 8 and 12 years old, which would make it between 1958 and 1962.

What makes it different is that my sighting was during the day and the craft was on the ground. I was climbing a tree in a neighbor's yard. The land sloped downhill from where I was. From that high vantage point, I could see across a forest that was intersected by a meandering power line that was probably ¼ to ⅓ of a mile away from me as the crow flies.

There were 2 sets of lines, and there on the ground was a saucer shaped disk with a dome on top. The craft appeared to span most of the distance between the stantions so I would guess it might have been 50' across. It was a sunny afternoon and the sun reflected off the craft, but it was not polished and shiny. I would describe it as looking like brushed aluminum. I could not tell, or I don't remember, whether it had windows or portholes. The object was not moving at all.

After looking at it in amazement for several minutes, I ran home to get my mother. I tried to convince her to come and see what I had seen, but once she learned it involved climbing a tree, she would not come with me.

I returned to the tree on my own and sure enough the object was still there.

I do not know why I didn't try to get someone else to pay attention or to see it. The site would not have been visible from the road and we would have had to hike the power line. The line ran roughly parallel to the road I was on and bisected a road at a right angle to ours. My mother did not drive and it would have been a long walk for me, and a scary one.

That argues that perhaps I was closer to age 8 than 12.

Later at dinner, I told the entire family about it. My father said it was probably a utility truck working on the lines. I remember feeling very hurt that nobody would believe me, and insistant about what I had seen. My grandmother was there, probably to baby sit that evening, and I asked her if we could go to the library and get some books. I do not recall ever seeing any movies or comic books about UFOs before that, but I must have been vaguely aware they were being talked about.

From that point on, I devoured everything I could find on the subject.

This has haunted me my entire life. This was not a mysterious light in the sky, but a solid object seen in broad daylight. We are most definitely not alone.