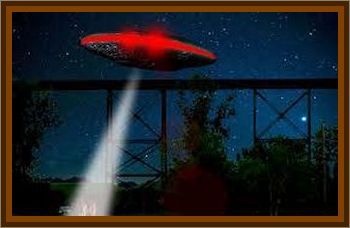 In the early morning between 2:00 a.m. and 3:00 a.m., Mrs. Mary M. Starr, a resident of Old Saybrook, and a holder of two degrees from Yale University, was awakened by bright lights passing by her bedroom window. The bedroom is located on the second floor of her cottage, the floor being 15' above the ground level.

She was looking north.

She saw an object just coming to a stop about 10' from her house. It appeared to be about 20' to 30' long, dark gray or black in color with brilliantly lighted portholes.

The object remained motionless, about 5' above the ground, and had no protrusions of any kind.

Through the windows, Mrs. Starr saw two forms which passed each other, going in opposite directions. What appeared to be their right arms were upraised, reminding her of stewards carrying trays, but no hands were visible. They wore a kind of jacket, their heads were square or rectangular, of a reddish orange color, with what appeared to be a red bulb located at the middle of the head. The feet were not visible.

A third form entered from the left, and Mrs. Starr leaned forward in an attempt to see its face better, and at that point, the portholes faded and the entire shell of the object began to glow.

Immediately, a kind of antenna about 6" long, rose from the top of the object at the end nearest to Mrs. Starr. It appeared to oscillate and sparkle. This antenna continued to glow and sparkle for about five minutes, and then the craft began to move to the right, back in the direction from which it had come. It made a very abrupt right angle turn, turned bluish gray again, and small circular lights outlined the entire rim where the portholes had been.

When it was over the nearby marsh, it tilted steeply and shot up into the sky at the speed of a jet takeoff, but without any sound.

Considering the fact that the object, while near the ground, was just above the clothesline yet below the upper part of the tool shed, according to Mrs. Starr’s account, it is assumed that the object was about 6' thick, and probably about 20' in diameter. Therefore, the occupants were no more than 4½ feet tall.