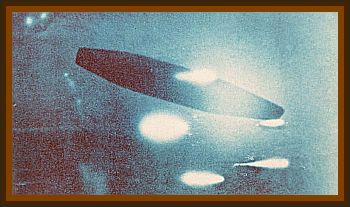 Just before 9:00 p.m. on the evening of October 3, 1978, 29 year old, Hideichi Amano, the owner of a local snack bar, sat in his car on top of a mountain area overlooking Sayama City in Japan's Saitama Prefecture. Amano was a keen Ham radio operator and the reception was much clearer from this spot.

On this evening as he listened to the chatter on the radio waves, he was chatting with his brother who lived on the other side of Japan. They spoke for several minutes before Amano spoke to several other Ham operators in the area. In the car with him sat his 2 year old daughter, Juri, and because of this he would excuse himself from the airwaves and make the decision to return home earlier than normal.

However, just as he began to set out for home, a strange bright light announced itself and filled the interior of the vehicle rudely and suddenly. He quickly moved his eyes around the inside of the car trying to locate the source of the intense glow. Unable to do so, he turned his attention to outside the car, cranking down to the window and pushing his head outside into the dark night.

When he did, though, instead of seeing a physical object shining down a light towards them, he instead saw nothing at all out of the ordinary. The night and his surroundings were perfectly serene. The light, it appeared, was coming from inside the car.

When he returned his head inside the vehicle,he was confronted with the sight of his young daughter, laying on her back seemingly in a trance and foaming at the mouth.

Before he could turn his full attention to Juri, however, a strange orange circle of light appeared on his lower abdomen. He would trace the light, through the windscreen of the car and seemingly to a point in the distant night sky.

Suddenly, a feeling of something pressing against the right side of his head overcame him. When he turned his head, a bizarre unearthly creature with a pipe like object merging from its mouth stood next to the car. The pipe was pressing against Amano's face, from which he could hear voiceless high pitched noises. He would later liken them to a tape recording on high speed.

This bizarre creature's head was round but seemingly with no neck. It also donned large ears which were pointed at the top, as well as a distinct triangular depression on its forehead. The eyes would glow a blue white color, while the pipe pressing against his head would cover its mouth and nose.

The more he began to regain control over his senses in the following moments, the increasingly frightened he became. His attempts to start the car would go without reward. Both the engine and the headlights were seemingly without power. At the same time, the strange high pitched sounds continued, filling his brain with their alien message.

He seemingly submitted to this bizarre auditory grip until around five minutes later when the bizarre creature began to fade away. As did the device pressing against his head. Furthermore, the high pitched instructions ceased. And the orange light that apparently reached for him from somewhere deep in the cosmos vanished.

For a mini second, there was perfect silence. Then, the headlights, radio, and engine of his car burst into life at the same time. When he checked his watch, it was stopped at 9:57 p.m.

It wasn't until several minutes later after he had negotiated the descending road from the mountain to the foothills below that his daughter's calls for a drink of water snapped him back to the moment. Feeling safe he had put enough distance between themselves and whatever it was that had penetrated the car on the mountain top, he brought the vehicle to a stop momentarily to check on Juri.

After wrestling with whether to do so or not, he would make a report to police of the incident on the way home. Knowing immediately that they didn't take his information seriously, he would regret doing so.

By the time he returned home to the apartment above the snack bar he and his wife owned, his daughter was fast asleep. He would leave her with his wife, who was watching the counter of the snack bar, while he went straight to bed. A sudden and piercing headache had taken hold on the drive home.

Over the following days, however, likely from the police report, reporters and television researchers got hold of the account. One show, in particular, one of the most popular in Japan at the time called:

took an interest. They wished for him to undergo hypnotic regression so they could prove his case. He would agree and Akio Morihe, a professional hypnotist was in charge of unveiling just what happened that evening.

The sessions would be video taped and then shown in the episode. They would reveal some intriguing aspects of the encounter. Perhaps a little too intriguing.

There doesn't appear to be any doubt towards Amano regarding the incident. Those who would conduct the hypnosis sessions, however, the doctor and the television people are seemingly a different matter altogether.

Firstly, and perhaps most unbelievable, was an apparent memory of this strange creature instructing Amano on a subsequent meeting. The alleged time and date did not make the broadcast. However, a message to viewers assured them that should such a meeting take place, they would be on hand to witness it. Incidentally, as far as most researchers are aware, this second meeting never took place. And certainly not in the presence of a television camera.

Secondly, Morihe appeared to press the subject considerably. Particular over an apparent object that was given to him by the strange creature. Eventually, amid this barrage of questions from Morihe, Amano claimed he was given a rosary. At least that is what it was determined he had said. As he came out of the regression, he would claim this item was, in fact, a bracelet. The audience would learn this bracelet would allow Amano to contact this creature if he were to ring it.

Furthermore, Amano believes that something was now inside his mind so these creatures could remain in contact. It would vibrate, he would claim, when action was necessary.

The television producers of the 11:00 p.m. show had picked up on the bizarre nature of the story. And most likely without Amano's permission, looked to play out a predetermined storyline for their viewers. It is worth remembering that this particular show was one of the most popular shows in Japan at the time. And such content as alien visitation or abduction was exactly the kind of thing they would often look at.

However, while 11:00 p.m. may have looked to benefit from the report of a bizarre encounter, several other such incidents around the same time may suggest that at least the initial incident as reported by Amano may have taken place as he said. And what's more, going back to the words of Jenny Randles in our opening, most of these encounters were of a terrifying and invasive nature.

For example, Amano would insist that something was placed inside his head. This is a seemingly recurring theme of those who claimed close encounters with extraterrestrials.

The frightening image of an army of alien programmed zombies in their millions all around us waiting, perhaps without knowing it, to be stirred into action emerged quite spookily from many cases of this type. Indeed, it does. Perhaps even more so when we look at world events as a whole. Certainly over the last 50 to 60 years. Coincidentally, roughly since the beginning of the contemporary UFO era, and certainly since the age of alien abductions began.

Although it took place just over six months previously, an incident on the evening of March 17, 1978 in Risley in Cheshire, England shares several details with the Sayama City encounter.

Engineer, Ken Anderson, was driving home near the atomic energy plant on the outskirts of the area. Suddenly, as he made his way down the usually quieter country roads, a strange shiny humanoid figure appeared to step out in front of him.

How it moved, including down an extremely steep embankment was distinctly unhuman like. In fact, even more to the point, it would appear to the witness that the figure floated into the road. Interestingly or not, near the sighting location, a research facility in sensory deprivation experiments resides.

Even more bizarre, and similar to the encounter in Sayama City, the figure then turned to face Edwards' oncoming vehicle. Then, beams of light emerged from seemingly out of nowhere, striking and infiltrating his vehicle. This would allow the figure to walk straight through a 10' high fence before vanishing.

When police arrived to investigate, they would discover evidence of a huge power surge in the area. Furthermore, Edwards would discover that the radio on his car was completely dead. It was later found to be blown apart from within, apparently a victim of the aforementioned power surge.

Even more tragic, in this case, is Edwards would go on to develop various cancers. From which he would pass away at a very young age. Was his untimely end could be a coincidence? The fact such an end should await him after exposure to unknown beams of light at a scene with evidence of a huge power surge should perhaps push coincidence down the list of possibilities.

Bizarrely enough, a very similar incident occurred, also in England, and this time only five days after the Amano incident. Shortly before midnight on the October 8, 1978, an unnamed man was driving along the road near Lowton, Manchester. Beside him, his wife slept in the passenger seat of the moving vehicle.

Much to the man's disbelief, as the car cut through the night in front, the headlights caught sight of a strange humanoid figure. It was standing on a traffic island in the middle of the road. The strange figure seemed to be wearing shining, silver overalls. And even stranger, a strange, orange glow that appeared from somewhere unknown but seemed to encase him.

The man would continue to drive forward, his wife completely unaware of the incident. However, he would later learn that on the same stretch of road, only a little earlier, several reports had come in from members of the public. Most of a large bright object overhead with a silvery dome and an orangey light from the underside.

On the same evening, and roughly at the same time to the south of Manchester in Birmingham, an 11 year old boy would report a strange, pale, orange glow in the bedroom. So bright that it woke them several times. As did the loud bangs from overhead.

On this occasion, the witness would also report something else during the same incident. A small humanoid figure with large eyes was present in his room. Even more disturbing is when he finally was able to leave his room and tell his mother of the encounter. She was already awake with the strangest feeling that someone was beside the bed watching her.

Let's return to the case of Hideichi Amano for a moment. It would perhaps be a safe assumption, like many other encounters sometimes unfold, that the initial incident that took place on the mountain top overlooking Sayama City was genuine and authentic.