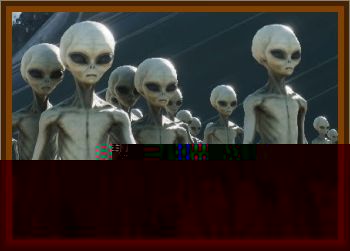 A senior executive of the Steep Rock Iron Mines and his wife were on an outing at Sawtooth Bay on Steep Rock Lake in Ontario. They had beached their boat on a sandy shore where there was plenty of shade, had some tea and sandwiches, and sat back to relax.

Instantly, a shock wave was felt, the air seemed to vibrate. The man thought it might have been a dynamite blast but there had been no sound. The executive decided to investigate and climbed up on a rock outcropping which protruded above the undergrowth.

Looking through a cleft in the rock, the observer saw a large shiny apparently metallic object resting on the water about a quarter of a mile down the shoreline. He quickly scrambled back to his wife and brought her back to the niche so that she could see the object too.

It looked like two huge saucers stuck together, lip to lip. What appeared to be round black edged portholes were arranged around the circumference, where the saucers joined.

On the top of the bizarre craft what appeared to be hatch covers were open and the observers saw about 10 small figures moving about. Protruding from the top to about 8' above the deck was a hoop shaped object which rotated slowly. When it appeared to be pointed at a location directly opposite the two observers, it would stop and so would the little men. The man and his wife got the distinct impression that the concentration was on their location and ducked behind the rock.

The hoop like contraption seemed to be operated by one of the figures on a prominence directly below it. This being had a bright red apparatus on its head while the rest of the figures on the superstructure were wearing blue headpieces of some type.

The executive estimated that the size of the object was approximately 48' in diameter, using the size of two trees on the opposite shore as points of reference, and that the little men, who had shiny metal of some kind on their chests and dark clothing, were between 3½' and 4' tall. No features were noticed, of course, because of the distance, about 1200'.

The couple agreed that the tiny figures moved like robots, did not turn as normal beings do, but changed direction laboriously as though it was a difficult task, and turned their feet before turning their bodies.

Two bright green hoses extended into the water, and during the sighting, a distinct humming sound could be heard. The witnesses thought that water was being taken into the ship with one hose and that it was being discharged back into the lake through the other.

Each time the rotating hoop pointed in their direction, the man and wife would duck behind their rock shelter. The last time they ducked, when they stuck their heads out again, about 20 seconds later, the figures and the hoop were missing, and the object began to rise from the surface of the water. Where it had rested, the water was tinted red with a slight gold cast.

The object was estimated to be about 15' thick at its highest point and about 12' thick at the edge. There was a rush of wind as it took off at about a 45° angle, whereupon it vanished quickly into the sky.