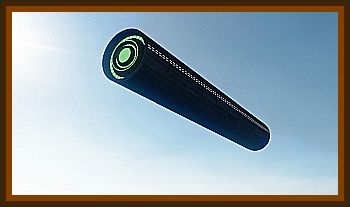 M. Louis Monin, 49, outside his house, saw an intensely yellow luminous object coming at very low altitude over a nearby cemetery, he called his 17 year old granddaughter Marie Solange to watch it.

The object approached, exhibiting a fat cigar shape, then, after oscillating and turning red/orange, it landed in Monin’s garden, 110'away from the observers.

It was about 60' long and 20' high. At each end of it a jet of flames, directed obliquely downward, appeared, and a crackling noise could be heard.

Then a stout little man, 3½' to 4' tall, appeared standing beside the object. No details were noted. Monin and his granddaughter immediately went back into the house to call his wife, but when they came out again the little man was gone, and the UFO now appeared as a red luminous ball about 25' in diameter. This ball took off and was soon lost to view.

The observation had lasted for 5 minutes. No traces were left in the garden.