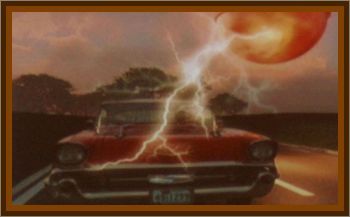 Location: Between Pelkosenniemi and Kemijarvi, Finland

A traveling salesman was driving his car on the Saukkoaava Road towards Vuostimo when he was near the outskirts of Kemijarvi close to the Niskala farm he spotted a large disk shaped bright object descend gently towards the ground, flying over his car. As this happened his vehicle engine ceased to run and he had no choice but to stop the car. The bright object landed on the road some 300' away. The witness estimated the object to be about 12' in diameter and 5' in height. It was shining brightly.

A few minutes’ later two small humanoids appeared besides the object. In the darkness the witness could see that they wore strange looking dark green suits and were about 2½' in height. The two humanoids began to walk towards the witnesses car, but when they were about 130' away they suddenly turned around and hurried back to the object.

The witness did not see how they entered the object but the object ascended almost at once straight up and vanished behind some thin clouds without a sound.

When the object disappeared he was able to re-start his car again. He drove to scene where the object had landed and he found three landing marks, 2" wide and 8' apart.