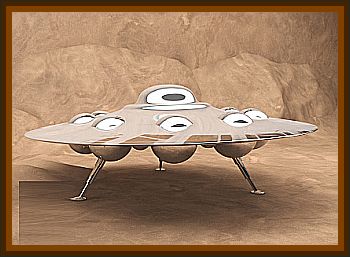 I was driving my son age 14 and my roommates twins age 9 to my son’s basketball game.

We were driving down Circle Drive Bridge going west when I looked up in the sky and noticed a metal object in the sky.

This object was located above but just behind the Rona building not too high up. I told the kids to have a look at this thing and we were all in awe. The traffic light at Circle Drive and Miller Ave., it turned red so then we had a better look. This object which I believe was a UFO, was not moving, it was just sitting there idle in the sky. It was a metal saucer shape with about 5 legs with these large metal balls under the legs but not attached to the legs. These balls were idle spinning very fast. It was almost like the spinning balls were keeping the UFO in mid air with the force.

Then the balls started moving in a counter clockwise direction, still spinning, underneath the object in a circle.

The balls were evenly spaced as they were circling underneath and then the balls started to make a wider circle and then they looked like they were going to move up into the underneath of the object. The light turned green and we had to go so what ever happened after that I’m not sure. I wanted to just sit there and watch this thing till the end, but my son was getting upset because we were going to be late for his basketball game. An hour later on our way home we kept our eyes on the sky but this object was gone.

I’m just thankful that I had other people with me who saw this because when I tell people they don’t believe me, even my best friend thinks I’m cracked.

Then about a month or 2 ago I was reading an article in the Star Phoenix about crop circles being reported at farms just outside the city. They showed a picture of a crop circle where the crop was flattened by something in a counterclockwise motion. As I was looking at the circle, and the size of the circle, to me it looked like the object I seen could of made a crop circle like that. The way the metal balls were spinning idle very fast and then the way they were circling around the underneath of the object going in a counter clockwise direction and the magnetic force feeling people were having.

I know there’s no explanation for these crop circles but this could be one of them to take into consideration.