Alien Looked As If On Fire 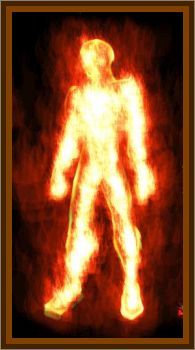 I am Antonio da Gacas Santos, Commander of Military Police in Tres Coroãs, South of Rio de Janiero. In February 1980, I rushed over to my neighbor's house because the back garden was brightly illuminated, as though something was on fire.

I then witnessed very clearly a creature about the height of a human being. Its arms were extended and I heard a low whining noise, like a puppy. I couldn't see details because of the extremely bright light. My neighbor reached out and touched the creature, then fell back as though experiencing an electric shock. I felt afraid, but not a normal fear, more like a sense of awe. I still get goose bumps when I think about the incident.

There seemed to be a fire around the creature, but it didn't burn anything. We looked up and saw an object hovering overhead, but again, because of the bright light, I could not make out any details. lt seemed as though flashes of light were also exploding in the tree tops. I heard something that sounded like a beating rhythm. Then suddenly, everything went dark and quiet.

I now believe that on other planets in other solar systems there exist forces which can manifest themselves here. I can think of no other explanation for this incident, which was beyond my capacity to observe accurately.