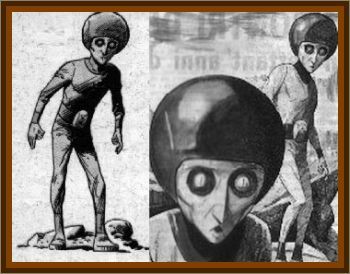 Signor Johannis was out painting near the Chiarso creek, at Villa Santina, close by Carnia/Friuli. The time was about 9:00 a.m. when he noticed a 30' disk shaped object that had landed some little distance from him. Signor Johannis saw two child sized beings standing alongside the object. The artist said that they were about 3' tall, and were wearing dark blue coveralls with a bright red collar and belt. They also wore spherical helmets on their heads, their heads seemed larger than normal, but their faces were not covered. Their faces had a greenish color, their eyes were large and plum colored with a vertical line through the pupil, in the center, and they had no eyelashes or eyebrows. Each had a straight and rather large nose. Their hands were claw like, greenish in color, and with eight fingers on each, four opposed to four in the same way that our thumbs are opposed to our fingers.

With his paint brushes still in his hand, the artist hailed the creatures. It is possible that this was interpreted as a hostile gesture, for one of the beings touched the center of its belt and projected a thin vapor which caused the artist to fall dazed onto his back. The creatures then approached to within 6' of the passed out artist, and stood examining his easel. Although weak, the artist was able to roll over, and saw the beings pick up the easel which had been knocked down, he perceived that it was taller than both of them. He also noticed that they were panting heavily.

They then returned to the craft and entered it, whereupon it rose from the ground, hovered and, according to the account, and disappeared.

When the unfortunate artist had sufficiently recovered his strength to be able to stand, he saw that his easel had disappeared.

There has been some criticism that the artist saw rather a lot, particularly the colors, in a very short time. Surely, however, this is where artists have a great advantage over ordinary mortals, as an artist's eye is quicker than a camera, and it's not surprising that Signor Johannis's brain could record such a mass of detail.

The description of the belts is interesting, and it calls to mind the belts of the entities in the Antonio Villas Boas. Also intriguing is the account of the gas or vapor, heralding as it does the incident of Cisco Grove Abduction.