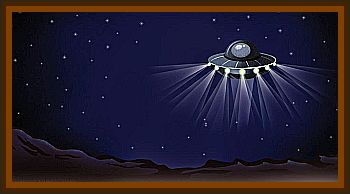 The witness, 15 year old Dolores Martinez Briones was at the time living with her parents at a military base, and that night due to the excessive heat she would get up in the middle of the night to open the windows and observe the stars.

On that night there was a full moon and there was a strange stillness in the area. As she stared at the firmament she felt an overwhelming urge to look towards a nearby field about 500' away.

There she saw a dull metallic cylinder shaped object hovering at 20' from the ground.

After a few minutes a hatch opened on the lower section of the craft and 2 men wearing white outfits stepped out, and descended slowly to the ground on a metallic platform without noticing the witness.

Their white uniforms resembled those wore by doctors. However the men soon noticed the witness presence and began staring intently at her. In total fear and unable to move Dolores watched from behind the window as the men approached to within several feet of her location.

At this point she heard a clear message in her mind which said:

Relax, we are peaceful, nothing will happen to you.

Immediately the witness felt at ease and somehow had the feeling that she knew the men. She opened the door and walked outside and then followed the men to their craft after receiving a telepathic invitation.

She described the men as human like, about 6' in height, very light colored skin, brown hair and brown eyes. They wore thick soled white colored shoes.

After accepting their invitation Dolores and the men arrived at the hovering craft and the hatch opened up again.

At this point a third seemingly older entity appeared at the hatch. He was also human like about 70 years of age, with white hair and a short white beard. He wore a white tunic like garment and also white thick soled shoes, he was about 5' 2" in height and a very pleasant countenance. He greeted the witness by extending his hand and motioning her to step inside the craft.

Once inside she looked up and saw numerous small multi colored lights on the ceiling and also on the walls and halls. In the center of the craft there was something resembling a metallic desk and a bench, both objects appeared to be welded into the floor and were surrounded by a short ledge.

The elder alien then approached Dolores and asked her if she wanted to know about his planet, promising Dolores that she would be returned. She accepted and then the older man extracted a suit similar to his from the metallic desk and asked her to wear it. The suit was white, long and of a very thin material almost semi transparent, she wore it over her pajamas.

Ready to embark on the trip, she received instructions to grab a hold of the ledge during the complete journey. She then heard a door close and the 2 taller men stood next to her one on each side. The elder alien sat on the bench by the desk and began pressing buttons similar to those on a microwave.

Several minutes later the leader told Dolores that they were already in outer space and were traveling at a velocity unimaginable by humans, he added that this would put his world at about 2 light years away theoretically. He told her the name of his planet and galaxy which she wasn’t able to remember. During the whole trip she did not feel any sense of movement.

She developed an urge to look at the stars and asked the alien leader if she could do so. The leader pressed a button and a small window like opening became visible, which she could only see darkness through it. The alien leader explained to her that due to the velocity she was not able to see anything outside. At this moment she asked the leader for his name and he told her to call him Elder one, since they identified themselves by codes and not names.

She noticed that the leader was the only one that communicated verbally with her, the other taller men used only telepathy. Later he asked Dolores if she wanted to see their planet from afar and she agreed, he then pressed another button and another window became visible, outside she was able to see a diminutive brilliant silver sphere, evidently the alien’s planet.

Soon the alien craft landed and a door opened which led to an enclosed area, which all 4 stood there for several minutes, she was told that they were going through a sterilization process. Soon after that the tall men disappeared and the older alien leader remained by her side.

After removing her spacesuit she was introduced into a transparent capsule like object, in there she went through some type of cleansing process in which she felt cool water and a cold breeze go through her.

After a moment a door opened and she stepped outside. She now stood in a room with a flat metallic ceiling and floor illuminated by a tenuous light from an unknown source.

Soon another door opened and the alien leader appeared carrying a tunic similar to the one he was wearing which he asked Dolores to wear. She was then led through a broad corridor with a luminous mirror like floor where she saw multitudes of people all in constant movement, many were cleaning the floors other carrying packages, and all seemed to be in a hurry.

Ahead on the corridor she found what appeared to be electric passageways in which the aliens traveled through. Without distinction, all the alien men and women wore beige blue clothing and all had short hair and were of thin built. The women were somewhat shorter than the men. And one thing that caught Dolores attention was that all seemed to be of the same age.

She did not see any older aliens with the exception of the alien leader that always accompanied her. She traveled everywhere with the alien leader and noticed that all the other aliens seemed to ignore her but showed great respect and reverence towards her guide, who seemed to give out orders and instructions by using hand gestures. There also seemed to be a group body guards or servants always following them.

Sooner or later they reached an area in which there were several corridors all leading into different directions. After a moment of hesitation the alien leader told her to follow him that he was going to show her the place where they lived. He emphasized that their way of living was very different from humans and that marriage did not exist in their society. Their population was totally controlled, when one of them died another one was born to replace him or her, this was done through artificial insemination.

Disease was non existent in their society and no one grew old, except for him since he was a leader. However he said that they were no immortals but lived for a long time.

She was led through an endless labyrinth of corridors where everyone moved along in perfect order, no one seemed to laugh or joke around. Later she was shown what appeared to be their living quarters about 20' by 20' in diameter designed for 6 persons. A small window became visible and a small platform jutted out on it was a plate with several bon bon shaped pieces, yellow/orange in color.

She was offered a piece but refused. Later she was taken into a large auditorium and in there it was revealed to her that they also believed in God, who was the same in all parts of the Universe.

From there she was taken to another location which appeared to be a center for children only. There was only an adult woman who seemed to be operating several computer consoles and screens. On the screens Dolores could see several hieroglyphics type symbols, on them she recognized the letters Z and X.

For the first time Dolores saw somebody else smile on the planet as an 8 year old child saluted and smile at her. Soon she was taken along another corridor into a beautiful location or garden filled with trees, shrubs and different colored flowers and covered by a huge transparent glass dome. She was told that in this particular garden they kept flowers that they had brought from Earth.

This is a sample of what our planet used to be, it was the same as your Earth, only that the ozone layer became depleted and we were forced to live underground to escape the powerful ultraviolet rays of light.

She asked if there was water available and was told that only very little and it was used only for drinking. The alien leader then went on to say that they were almost identical to humans that their organism possess several functions which were different from humans. He told Dolores that they were a peaceful people and were ready to assist humans whenever necessary.

She thanked him and they returned back through the same path and on their way back he told her that in their planet lived humans who were there of their own free will and then looking straight at her eyes he asked her if she wanted to stay with them.

At first she was confused, but then thought about it and told the alien leader that she did not want to stay. She was then given the traveling suit again and taken onboard the spacecraft by the taller aliens. Strangely none of the other inhabitants bade farewell or goodbye to her, most seemed to ignore her.

The return trip was again in total silence and before walking home the alien leader advised her not to tell anyone since no one would believe her anyway.

Arriving at her front door she stopped and turned around but the craft and the aliens were already gone. To this day Dolores has always regretted not staying with the aliens when she was invited to do so.