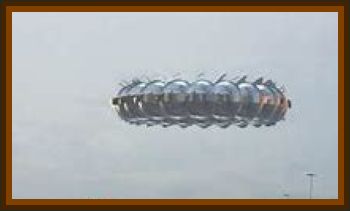 Dr. W., biochemist, and Dr. Y., bacteriologist, both employed by a private company, about 11:00 a.m. were driving to their office when Y. saw something odd overhead that seemed to be moving against the wind. They entered the company parking lot and got out of the car to look.

Directly over a building across the street was a small, metallic looking disk, tilted at about a 20° angle and rotating around a vertical axis, wobbling like the motion of a disk in a water meter.

The distance was estimated to be about 50' and the disk appeared to be 4' to 5' in diameter. The wobble allowed them to judge the thickness as about 1½' as the disk proceeded directly over their heads, continuing to rotate and wobble.

No sound or exhaust emission of any sort was detected. It moved in an arc about 40' to 50' overhead very slowly, perhaps 8 to -10 mph. When it neared some railroad yards, the disk curved around and made a fairly distinct turn, heading back toward them.

At this point Dr. Y. saw something else overhead, which Dr. W. also then saw:

A black object at high altitude hovering motionless under an overcast, later determined to be about 10,000'. It was round, and apparently much larger than the silvery disk, perhaps 100' in diameter.

As they watched, 2 identical objects came into position as if they had dropped out of the cloud overcast, and the 3 objects jittered around like boats in a stream.

About this time the small disk had neared again, still moving slowly, it stopped spinning, hung motionless for a moment, then rapidly climbed towards the NNE in the general direction of Mt. Hamilton.

At the same time that the small disk began its climb, one of the three black objects left the formation and headed in the same general direction. The black object and the climbing disk seemed to be on a converging course, when both seemed to disappear into the overcast.

The remaining objects maintained their original position for another minute or so, then one of them headed off to the North and out of sight, while the other went directly up into the clouds and disappeared, terminating the incident at about 11:15 a.m.

Both scientists immediately went into their offices and dictated accounts of the sighting for a permanent record.

Dr. W. felt obliged to make an official report and placed a call to Moffett Field. While waiting on the line for someone to be found to take his account, he had second thoughts about exposing himself to personal ridicule and hung up, so no report was made to the Air Force or other agencies.

In addition to the observation by scientifically trained witnesses, and loss of an official report due to the ridicule factor, the scientists’ reaction is instructive.

They had found it a most disturbing experience.

They had been forced to the conclusion that they had seen some objects of such unusual propulsion characteristics that it was difficult to think of it as anything other than extraterrestrial.

It utilized some propulsion method not in the physics books.

He had been worried ever since, mentioning historical evidence that inferior civilizations tend to go under when contacted by more advanced technologies.