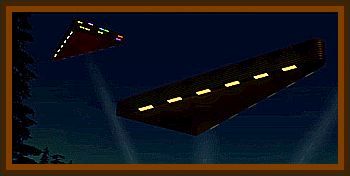 At around 6:45 p.m., a friend and I were outside on our back deck looking to the crystal clear night sky facing west when we saw 2 large black triangle shaped objects move slowly and at a low altitude, 500' to 1000' directly over our house from the northwest Mt. Davidson area to the southeast.

We live in San Francisco on the south east side of Mt. Davidson at the cross street of Terasita and Los Palmos in Miraloma Park. Both distinct objects that we observed were flying in side by side formation and appeared to be moving as one. Both craft were perfect equilateral triangles with pulsating dim star like lights on each tip of the each triangle, 6 lights in total.

The objects were very well cloaked, best way to describe it, against the background of the night sky and could have easily been mistaken as constellations but they were moving slowly which is what caught our attention.

The entire sighting lasted for approximately 30 to 45 seconds.

The objects did not appear to change speed, direction or altitude and moved slowly together overhead until they dimmed out of sight near the South side San Francisco crossing over 280 onto the northwest of the San Bruno mountain range.

I have been an amateur astronomer for over 25 years now and I can say with conviction that these were definitely not planes, satellites, blimps, helicopters, the International Space Station, meteorites or fire balls.

They were 2 solid triangle shaped objects that move in perfect formation together and made absolutely no noise as traveled directly overhead. Both craft were identical in size and were significantly larger than a 747.

The weather conditions in San Francisco last night were crystal clear and ideal for sky watching. The crescent moon had also just dropped below the southwestern horizon about 15 minutes prior the time we witnessed this once in a lifetime sighting.

We were both truly shocked by what we had just seen, to the extent that we felt it necessary to call into 2 local TV stations, CBS 5 & KGO 7, to report what we witnessed.

I am in my late 30s and the other person in their early 40s. We both have always been rather skeptical of alien spacecraft visiting Earth simply given the vast distances between stars and the time required to travel such a distance without bending space/time.

But having just what we say with our own eyes lastnight, we can now say with absolute conviction that they were highly advanced craft that one’s gut feeling tells them to be otherworldly.

Neither of us had been drinking nor were we in any other altered mental state of consciousness at the time of the sighting. If anyone else saw any strange objects lights in the Bay Area night sky lastnight please feel free to contact me.

I consider this experience one of the most amazing events of my lifetime that I cannot refute.

Whether the objects were deeply classified military X Project space craft or Alien cannot be proven, yet, but the objects had an eerie feeling to them in the way that they moved together and at the angle the triangles were positioned in flight.

The profound impact of this event will forever change how I look at humanity and that such highly advanced technology does exist regardless of its origin. I have not heard anyone else reporting what we saw lastnight in the media or on the internet but hopefully other people in the Bay Area witnessed the same event.