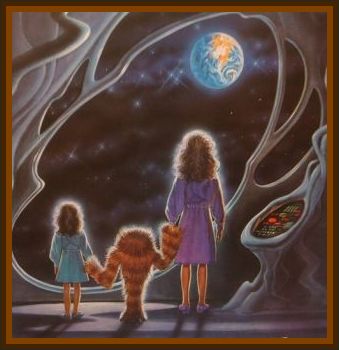 Fay, 7, with a boy about her own age, was on the golf links when they heard a wailing siren like sound. They followed it through a hedge into a swampy meadow. The noise ceased.

As they were crossing a brook by a footbridge, a strange figure came out from under the bridge. This person fumbled with a book, dropped it in the water, retrieved it, and then went with a strange hopping motion, with knees raised high to a metallic hut with no windows. The being was nearly 7' tall and neckless. He wore a yellow, pointed, hood like hat with a black knob on top and wooden antennae or horns on the sides, and a green tunic with a red collar.

His face had triangular markings for eyes, a brown square of a nose and motionless yellow lips. Other round markings were on his paper white cheeks, and a fringe of red hair fell onto his forehead. Wooden slats protruded from his sleeves and from below his white trousers. There were only 3 fingers on each blue gloved hand and 3 toes on his bare, white feet.

The being carried from the hut a black knobbed microphone, into which he spoke, the children were now 150' away, saying:

Hello, are you still there?

Since his tone sounded friendly, they approached him. He then wrote in a notebook, in a large hand, Hello and I am all colors, Sam.

Talking without the aid of a microphone, his lips did not move, and his speech was unclear. He asked the children about themselves.

They asked about his clothes, which were all ripped, and asked if he was really a man.

No, he replied, with a chuckle.

When they asked if he was a ghost, he answered:

Well, not really, but I am in an odd sort of way.

What are you then? they asked.

He replied: You know.

He also said that he had no name, and confided that he was frightened of people.

At his invitation, the children crawled through a flap into his hut, which he told them he had just made. It contained 2 levels. The lower, which had plenty of headroom, was wall papered in blue green and covered with a pattern of dials, there was an electric heater and simple wooden furniture.

The upper level, less spacious, had a metal floor. He told the children that he fed upon berries, which he collected, and drank the river water after cleaning it. He said he had a camp in the mainland.

Inside the hut he removed his hat to reveal round, white ears and sparse brown hair. Before eating a berry, he performed an odd trick with it. He placed the berry in his ear, where it disappeared and reappeared at one of his triangular eyes, repeating the process, the berry traveled to his mouth.

The children talked to this being for at least 30 minutes, then rushed across the golf links to tell the first man they met they had seen a ghost.