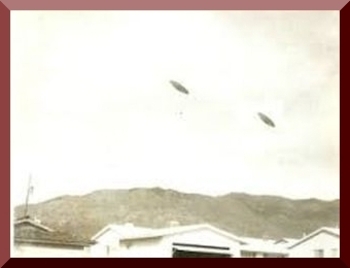 Farmer Christian Sandersen and his wife claimed to have seen two flying saucers over their farmhouse.

One saucer stayed airborne while the other landed and disintegrated into thousands of brightly glowing sparks. Apparently nothing was found at the site and little more is known about this particular case.One finds in a Californian newspaper information coming from Copenhagen, Denmark, according to which Sandersen and his wife said to have seen two flying saucers, one passing above the roof the farm, the other landing in their yard court and disaggregating in less than one minute in thousands of sparks.

It is said that the saucer had a shining light at its bottom of transparent aspect and flew a red ribbon.In an Italian Nazi saucers book, the case is that according to the local press, on February 18, 1950, in Zealand, Denmark, Christian Sandersen, owner of a small patch of ground on the East coast, saw two flying saucers flying by night several miles out on the sea. One flew high, the other only at 500 meters, seemingly hesitating on the course to take and coming down to 500'.

The higher saucer allegedly joined it, and after several minutes, flew away, while the other burst into a blinding ball of flames.A similar but later and briefer version considers the case is a UFO crash and indicates that the saucer had landed before exploding. Lastly, a Danish source gives a version which is said to come from Marie, Sandersen’s wife, quite different, since the first “saucer” is a 20" red bar, and the second, no bigger, is said to have hovered within a few feet of the bedroom window of the couple, illuminating the room, and instead of exploding it disappeared as if one had switched the light off. In addition to major divergences between the available sources, it is quite amazing that the case entered a catalogue of encounters with humanoids, as none is reported.