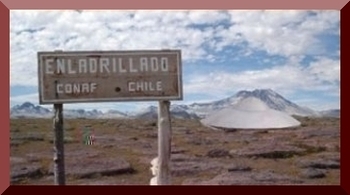 San Clemente, Chile might be considered the unofficial UFO capital of the world. Researchers say that hundreds of UFO sightings have been reported there since the mid 1990's, as many as one per week from 1995 to mid 1996, sightings have been made of shining spheres going into the water and into wooded zones without any human explanation, stated Rodrigo Fuenzalida, president of the Chilean Group for UFO Research, AION.

To commemorate San Clemente's place in supernatural lore, the Chilean tourism board established an official UFO trail in 2008. The 19 mile trail winds through the Andes mountains to hit numerous sites where close encounters have been reported. That includes Colbún Lake, which is believed to be popular with UFOs because of its high mineral content, along with various signs detailing historic sightings.

Visitors to Chile are no strangers to peering up at the clear, infinite skies, with world famous observatories in areas such as La Serena and Atacama allowing everyone, from enthusiastic amateurs to professional astronomers, to join the dots between twinkling constellations of stars.

But if you think the greatest surprise coming your way will be a shooting star, you might need to think again.

Believe it or not, Chile is often cited as the country with the highest recorded number of UFO sightings. Low humidity, plateaus at high altitudes, and clear skies which are relatively free from light pollution, all conspire to make it a favorite among UFO seekers the world over.

The clear skies of Atacama offer unrivalled views of our galaxy.

While the unassuming Andean town of San Clemente has gained galactic fame in recent years, becoming an unexpected mecca for UFO enthusiasts. Since the mid nineties, hundreds of curious sightings have been reported in the area. Dubbed by British Airways magazine HighLife to be the best place in the world to come into contact with an extra terrestrial.

San Clemente’s clear blue skies are perfect for keen and inquiring eyes to seek out the weird and the wonderful spinning through the sky. From glowing orbs sweeping downwards to sink into rivers and lakes, to hovering disks appearing quite literally out of the clear blue, many a baffled local has a strange tale to tell.

Along the trail are restaurants, cabins, campsites, and information boards detailing noteworthy encounters with the otherworldly. UFO hunters can also explore the peculiar landscape of El Enladrillado, an enigma in itself. After several hours of trekking by foot or on horseback, this plateau can be found at an altitude of 7,500'. Made up of 233 rectangular volcanic stone slabs, these have been arranged to form a vast, flat surface, which many believe to be the ideal landing pad for spacecrafts. It’s a marvel worth visiting even if you aren’t lucky enough to unravel the secrets of the universe, since no one has managed to explain which ancient culture managed to create this geometric stone pavement in the middle of nowhere. This eery zone takes four hours to approach on horseback, and is believed to be a landing pad for flying saucers. The unique trail gives tourists a supernatural sight to pair with the country's natural splendor.

During the trail, you can also drop in at Lake Colbún, which supposedly attracts unusual activity because of its high mineral level. No guarantees of a glimpse of a flying saucer, of course, but you never know.

Further north, things are looking no less spooky and suspicious, recently the Chilean government officially categorised an object hovering over the Atacama Desert as a UFO. The separate governmental office created specifically to investigate UFO sightings in the country, the CEFAA, was alerted to the sighting of a disk shaped body, spotted by technicians working at the Collahuasi copper mine. The perplexed witnesses initially intended to keep their experience quiet, fearing disbelief, and it was only when the chief engineer at the mine saw the photos that he sent them to the CEFAA for analysis. All possible meteorological explanations have been dismissed, and thus the mystery remains, with some considering the object to be a missive from outer space.

And if after all that you are still hot on the heels of the weird and unexplained, you can head to the Elqui Valley, near La Serena, which is famed for its crystal clear skies, observatories and, you guessed it, the odd UFO sighting. Thought to be one of the most magnetic places on Earth, and a renowned source of powerful cosmic energy and paranormal activity, idle stargazing in the valley might just make us earthlings realise that we are not so alone in the universe after all.