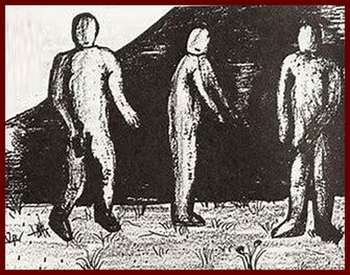 John Doe was watching the sky to the south of his mobile home when he saw a large saucer shaped craft slowly proceed down and just above the trees from east to west. He followed it with his eyes as it passed just before him about 100' away. It then settled silently in the corner of the next field about 1500' away. John walked over to where he saw it land. It was a clear, cool, moonlit night, around 11:00 p.m.

He took no flashlight or camera and felt no fear. He easily found the craft as a very bright light shone from beneath it at the far southeast corner of the field. As he approached about 20' from the craft he noticed an individual in the light from the bottom of the craft directly before him. The humanoid figure appeared to have on a form fitting white suit. The eyes were covered in what appeared to be goggles or protective bubbles of tinted glass or plastic, he then noticed a second similar figure to his right only about 6' away. John was a bit startled, as he did not notice the approach of the figure. However his attention returned to the figure standing near the object by the light. This figure was busily attempting to catch a grasshopper, he held what appeared to be a glass sample container in his right hand and a stopper type lid in the other. He emitted a strange type of giggle as he finally caught the grasshopper.

The figure in the trees rejoined this one carrying a sample jar as well. In it John could clearly see in the light that it contained a sprig from an oak tree with leaves and acorns attached. They were both about 5' tall and lean. He then heard a sound of someone walking through the field of drying corn just to the south and behind him. It was a slow, steady type of walking sound, which someone would make walking on a field of dry grass. As it approached it stopped and then sped up as it walked around the witness. Into the light of the craft then appeared another figure in the same type of suit. He also carried a sample jar. The jars were about 4" around and about 15" tall with wide mouths and black stopper caps. In this jar he had an ear of the corn.

The third arrival hastily pointed out Mr. Doe to the other two as they all looked directly at him. He could only smile and wave, and then turn slowly and walk back to his home. The craft hovered silently about 4' off the ground. Nothing protruded from it except the bright light from an opening in the bottom. The opening was about 4' in width. He could see no stairs leading up to the opening. John did not see the object depart.