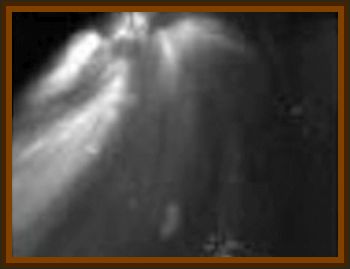 In the era of space flights, people began to notice strange things that were happening in space.

In the summer of 1978, Vladimir Kovalyonok & Alexander Ivanchenko, who went into space, noticed an undefined spacecraft flying under the orbital station as if observing the cosmonauts. Vladimir described the apparatus as a flashing tennis ball.

Kovalyonok, on Salyut 6, again collided with an unidentified object in 1981.

The device was located near the station, moving erratically, as if in pursuit of the cosmonauts. Vladimir saw how the UFO became transparent, inside which there was a jet engine that had no artificial origin. After some time, there were 2 explosions due to the contraction and expansion of the apparatus.

The object resembles a barbell. I saw it becoming transparent and like with a body inside. At the other end I saw something like gas discharging, like a reactive object.

Then something happened that is very difficult for me to describe from the point of view of physics, Kovalyonok said.

I have to recognize that it did not have an artificial origin. It was not artificial because an artificial object couldn’t attain this form. I don’t know of anything that can make this movement,tightening, then expanding, pulsating.

Another striking example is the incident that occurred in 1980 during the flight of the Salyut 6 station, onboard which were Valery Ryumin & Leonid Popov.

The cosmonauts captured some clots of sparkling spots that took off from the capital of Russia. But this case was confidential. 11 years later, documents and photographs of unknown spots that occurred in space were announced. However, the evidence disappeared after the events were declassified.

In the summer of 1984, the new Salyut 7 station was in space for 150 days. Onboard were Oleg Atkov, Leonid Kizim, & Vladimir Solovyov, who noticed that the entire space station was flooded with a bright orange glow.

Looking through the windows, the cosmonauts noticed several unknown creatures about 100' tall, who were flying through space, while smiling.

In the presence of an extraterrestrial race, cosmonauts felt calm and serenity. According to the crew members, the humanoids were flying at the same speed as the station for 10 minutes.

The crew thought it might be hallucinations or fatigue from hard work.

Upon their arrival on the ship, Salyut 7 was again illuminated by a blinding light. The entire crew decided to look through the windows. Aliens were flying in space again, smiling and giving calmness.

The crew of the Mir space station also observed unidentified objects. In the fall of 1990, cosmonauts saw a certain silvery ball in the Earth’s atmosphere. As described by Gennady Manakov, who saw the phenomenon, the object was a sphere that shimmered with silver.

Gennady’s observation lasted about 7 seconds, then the object evaporated.

In the spring of 1993, video footage was made showing the movement of a luminous flying vehicle. This video was filmed by cosmonaut Musa Manarov, who wanted to capture the docking of the cargo compartment.

It is still unknown whether these unidentified objects were representatives of a new extraterrestrial race or debris that flew through space. One way or another, people will find out about it in the future.