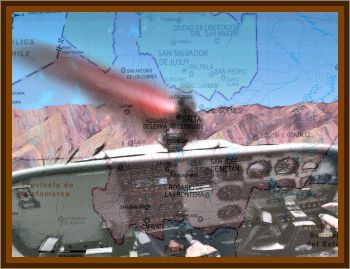 The event occurred in 1995 in the Serranía Colorada, community of Joaquin V. González. Details were never officially disclosed.

Ufologists still remember one of the most widely known UFO events to have occurred in the country, known as the Argentinean Roswell. It was given that name by its similarities with the 1947 incident in New Mexico, U.S.A.

In the early hours of August 18, 1995, the domestic press reported the collision of an allegedly alien spacecraft in the department of Anta.

At the time, private pilot Antonio Galvagno witnessed a confusing plot, as he would describe it, which kept the event from ever being solved. He said that he was having lunch on the day that the object fell and heard a loud explosion around 1:50 p.m., which caused the entire community of Joaquin V. Gonzalez to shake.

His initial sensation was one of fear, he told El Tribuno, thinking it was an earthquake, which cause the province to shake every so often. To his surprise, he took to the streets a few minutes later and saw a large column of smoke that made him think that an airplane or meteorite had crashed. The dense white trail was seen by dozens of local residence.

Curiosity motivated Galvagno to fly over the area in his two seat aircraft. He concentrated on the area where the crash had apparently occurred, known as Serranía Colorada. The flyer saw a column of smoke which he described as a cloud of soot with metallic particles. The search turned up nothing new. I found nothing.

Galvagno devoted the next two weeks to finding clues as to what could have happened, but without any positive results.

According to his story, he met with a group from the Gendarmería Nacional, national police, who forbid him to continue the search, pursue the investigation or fly over the area, the pilot decided to continue along with a group of locals motivated by curiosity. The news also reached the national television, print and radio media. It was brought up on programs such as the one by Susana Giménez and the late Jorge Guinzburg. Telenoche, Cronica and magazines like Gente dispatched correspondents to the area. There was never any official word as to what occurred and all that remained was a burned area measuring some 1700' wide by 3 miles long.

The hypothesis by the pilot from Anta is that a craft, regardless of its origin, slid along the path.

Vegetation never grew in the site again and the area was closed off. Gendarmería and the Air Force invoked reasons of national security, Galvagno said. He and many other residents of Anta always believed it had been a UFO.

On November 27, 2009, a considerable part of the Department of Anta was left in the dark after midnight following a blackout which occurred at the same time dozens of witnesses reported seeing a UFO over the city of Joaquin V. Gonzalez.

That according to eyewitness accounts, the craft was gigantic, sausage shaped and fully illuminated.

Citizens stated that the object flew over the power station for some minutes.

We were surprised that people from all over the city coincided in the description. Even stranger is that a blackout occurred.

Galvano, the witnessed to an event that he will never forget, stated that 15 days after the events, even stranger things began to occur:

Armed characters dressed in black, traveling in 4x4s and all terrain motorcycles turned up. They took over the search and the investigation. They wouldn't speak to any of us, but one day one of them asked me to drop the entire matter. He was Argentinean and his words were inscribed in my mind with letters of fire:

Forget it, Galvano, what's coming down is very heavy, he warned.

After that, I started to receive nocturnal phone calls with silence at the other end of the line. The pressure was such that I accepted the advice of the mysterious compatriot who made up the men in black team, and I moved from Joaquin V. Gonzalez for a few years. All I know today is that those people found nothing. Up to two years ago it was still possible to see them around, although at a minimal scale.

The pilot from Gonzalez, despite the passing of time, does not want to give up on his adventure and believes that together with his friends, he will succeed in unveiling the mystery of this strange day that changed his life.