Yellow Lights in the Night Sky 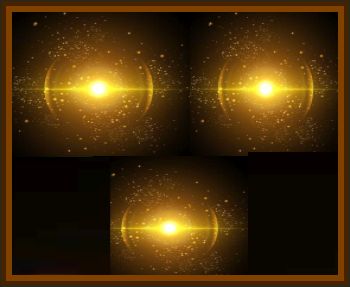 I have a 4 year degree and am working on my Masters degree.

I was traveling up I-85 in between Charlotte and Salisbury, traveling northeast.

As I was driving, I was looking periodically into the sky at the numerous airplanes with their flashing lights. Almost 6-8 airplanes were flying and moving in all directions across the sky in different directions.

Then as I look up again, I see 2 lights beside each other straight ahead in the sky and at first, I thought they were just stars because they were not moving or flashing, but I could notice they were brighter than any star in the night sky.

As I got closer it seemed to be getting bigger and was not really moving but seemed to be hovering, almost as if it was studying the nearby airport. It looked to be roughly 5 miles in the sky right in front of the road.

As I moved closer to it in the car, I could see vividly the 2 lights were now 3 in a triangle. They were a yellowish/orange light and still at this point, were not flashing like all the other airplanes in the night sky.

As I drove almost directly under it, I could tell it wasn’t moving or moving extremely slowly, as I saw the triangle of yellow/orange lights that looked to be about the size of 2 airplanes given the distance.

When we passed underneath it I looked back for a second it looked to be getting smaller and moving higher and away at about a 70° angle. I’m not sure what I saw but it was not acting like, nor looked like any of the other half a dozen airplanes in the night sky.

The 3 bright yellowish/orange lights seemed to take up more than half of the bottom of the craft.