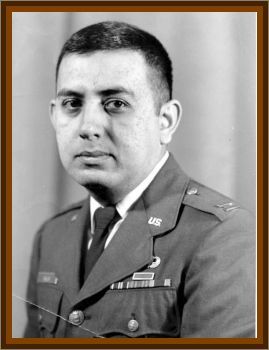 It’s been nearly 50 years since Robert Salas was a young missileer stationed at Malmstrom Air Force Base and, on a mid-March night in a silo near Roy, became an unwitting witness to history.

Awake and alert underground in the early morning while his commander rested in a 2 person compartment where men manage missiles, Robert was alerted by security guards up top.

They told me about strange lights in the sky, Robert says. I thought they were pulling my leg.

This time he was clearly frightened, extremely frightened, Robert says. He was looking right at the thing, a glowing red object, oval shaped and some 40' in diameter, and it was hovering above the front gate.

It was March 1967. When the Montana missiles malfunctioned.

Salas has written two books about this: Faded Giant & Unidentified, The UFO Phenomenon.

He considers them nonfiction to be sure.

There were 2 strange incidents just days apart nearly 50 years ago when missiles in the midst of Montana were rendered temporarily inoperable. Robert, who came to Great Falls in 1966 after graduating from the Air Force Academy, was there on one of the harrowing nights.

It’s called the Oscar Flight, in reference to the name of the site. I was shocked, he says.

And what happened the next day, he says, was even more stunning.

He was asked – basically ordered, he says - by commanders to sign a non-disclosure document in which he pledged to never talk about the incident.

That haunted me, Robert says. It haunted me for a long, long time. Because, he says, the truth is this:

It was an unidentified flying object that nobody could explain. To this day, Salas says.

The Air Force investigated this secretly, I believe through 1972. I think this thing was not of this earth. I’m convinced it was not built here, because it was able to send signals to each of our missiles separately. The guidance and control equipment was upset in each one.

Robert understands people are skeptical about UFOs. But undeniably there is a history of such sightings in Montana, particularly in this part of the state.

In 1950 there was an incident reported at the Great Falls ballpark that’s been the subject of many studies. Hence the ballclub is now called the Voyagers, the mascot of which is a warm and funny creature that makes people of all ages smile. Not that Robert considers his work any laughing matter.

This, he says, is a real phenomenon. It’s not science fiction. The public and public media has kept it pretty much in the laugh track of reporting. It hasn’t been taken seriously. But I’ve got a lot of evidence that shows it truly did happen. And also involving the Air Force investigation and basically the whitewashing of the whole thing.

He says the decision to remain silent bothered him for decades, for the rest of his military service and subsequent working career in the public sector. Then one day in 1994 he came across a book Above Top Secret: The Worldwide UFO Cover-Up, and about 300 pages in discovered a paragraph stating that UFOs were involved in a missile shutdown in 1967. That’s the night he was on duty. The Air Force had declassified the information. Since then, Robert has been on a mission.

Living now in California, Robert is still an active investigator. He says UFO sightings have occurred many times in the last 50 years, including a 2010 incident at Warren Air Force Base in Cheyenne, WY., when 50 Minuteman nuclear missiles mysteriously malfunctioned.

The Air Force, Robert says, is in denial. But why?

Well, I can tell you a couple reasons, he says. #1 these objects can do some pretty fantastic things and it would have military applications if they were able to recover an object and deconstruct it. They consider the technology they’ve gleaned from them very significant, and I’m confident they’ve recovered many of these items.

#2 is that it’s an international cover-up. UFO incidents been going on for many, many years, and there must be an international group, in intelligence, obtaining this information and sharing it. The other aspect of why they keep it a secret is because it’s political capital between nations.

Robert resigned his Air Force commission in 1971 because, he says, Vietnam got too much for me to stomach. That’s not to suggest he isn’t patriotic.

I consider myself a patriot, he says. Even though I’m convinced there are cover-ups going on that the public needs to know about. I think a good patriot is someone who influences people’s right to know.

Many believe of course, in heaven and hell. In angels and spirits. And in an afterlife. So perhaps it is naïve for people to be convinced there could not be life among the stars and beyond? And maybe, just maybe somebody was trying to tell us something by shutting down those missiles in 1967. A statement against war, perhaps.

Exactly, Robert says. I think this was a message, just a message. Because they did not damage the equipment. It wasn’t like they destroyed the weapons. It was just a weapon. I believe we have got to get rid of nuclear weapons because they’re so dangerous.

Of course in the present political climate this is very much an issue. We’re starting another nuclear arms race, says Robert, referring to his perception of the new administration in Washington.

We live in such a pristine country, the middle of Montana, where one envisions the landscape unaltered for centuries. That is, until the fenced missile silo facilities are noticed.

President John F. Kennedy is said to have famously referred to the Malmstrom missiles as the country’s Ace in the Hole. Roberts laughs.

Well, at the time we considered the communist countries a threat to us, he says. But times change.

Robert hasn't been back to Great Falls for several years. To think that 50 years has passed since the incident that changed his life, he says, is sobering. Talk about unsolved mysteries.

I’ve been making video clips and will publish them on YouTube, he says. I guess that’s the way I’ll celebrate this 50 year anniversary.

His website, My Evidence, details much of the evidence he’s accumulated.

What would Robert say to folks who continue to scoff at his conclusions?

I’d say they should do their homework before making such statements, Robert says. Not only myself, but multiple Air Force officers have come forward talking about similar incidents. So it’s not just me talking about this. There is good evidence and plenty of documents and testimony that support the phenomenon.

Northern lights appear regularly in our part of the world. And some 50 years ago men from Malmstrom were witnesses to lights not necessarily out of the north that, Robert Salas believes, were not of this world.

The takeaway, Robert Salas believes, is this:

Perhaps we all should be mindful we’re not alone.