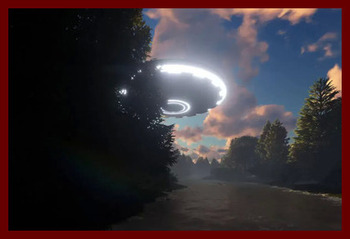 The following is a brief summary of the case. The case is from the files of the official French government UFO research program GEIPAN, Group for the Study and Information of Unidentified Aerospace Phenomenon, which is a part of CNES, the French government space agency.

The summary has been translated using automatic computer translation, so it is not a perfect translation.

A mother and her daughter in their car observe an object made up of an ovoid, oval shaped skirt, and a surmounted cylinder on a dome with 3 lights, portholes, sharp red in color.

On the cylinder, a fluorescent green light turned like a gyroscope. The object, silent, was suspended 12' off the ground and approximately 30' from the road.

Its size is estimated as 2 cars approximately. The object disappeared at the end of a few minutes.

The phenomenon observed was not explained.