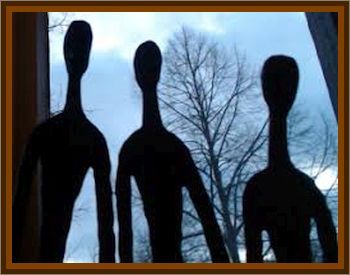 Local resident Mrs. Vinbe Hari was at home when suddenly the door of her house opened. However she did not pay much attention to it, expecting her husband to return from the fields, her 15 year old son Unar was already asleep.

Mrs. Hari turned around and was stunned to see a very tall man, completely unknown to her, and immediately after that 3 more similar appearing men entered her house directly through the wall.

The strangers were more than 6½' tall. The alien that she first saw then asked her in perfect Estonian: Where is your husband?

Regaining her composure, she answered that he was at work.

The stranger continued: Let's go with us, You will see how we live and what places we visit. We will show you our planet.

But her unwanted guest insisted: We will return you in the morning. Noticing that Mrs. Hari had then walked to her bedroom to dress, the humanoid said: You won't be able to move out of this room.

The stunned woman attempted to walk into her bedroom, but an invisible obstacle prevented her from doing so. After several sly attempts she looked at the alien who was smiling and he said: You don't need to dress, you won't feel the cold. Don't be afraid, we will not harm you.

That made her afraid. She asked the aliens why they had chosen her, she was 51 years old, so she offers her son in her place telling the aliens that he was very smart.

No we don't want your son, answered the visitor, and approached the bed where Unar was sleeping, and then the entity stretched his hand over the boy and the boy seemed to go into a deep sleep.

The stranger then spoke with the other humanoids in a strange metallic sounding voice in a totally unknown nonearthly language.

Soon after that the other 3 humanoids walked out of the house, again, right through the walls. At the same time the witness heard a deafening clapping noise. Afraid, Mrs Hari decided to run immediately to the other room, but again was prevented by the invisible barrier.

The visitor stretched his hand towards her, she touched the hand, which felt very soft. Then both walked straight through the wall and the loud clapping sound was again heard.

An alien craft was located nearby and both levitated in the night air towards it. The alien held her by the hands floating together.

Once the aliens took the woman inside the craft, she saw the 3 more humanoids sitting around in the cabin on soft chairs in front of what appeared to be control panels. The door to the UFO then closed and it then zoomed up, leaving Earth's atmosphere, entering deep space.

Finally the object landed in an unknown, to Mrs. Hari, planet. The journey was quite speedy. There she was taken into some building or structure where she was interrogated by the aliens for about 1½ hours in the presence of 5 additional aliens.

After the interrogation she was brought back to earth and to her home.

The aliens again visited her exactly one month later and again took her onboard the alien craft where possibly genetic experiments or manipulations were conducted on her.

Despite the persistent attempts of researchers to obtain additional information, Vinbe Hari refused to divulge all the details, she remained evasive and silent.

It was evident that something more profound had occurred to her onboard the alien spacecraft.