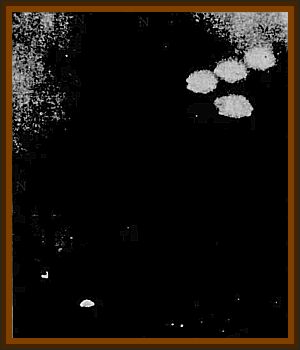 Herman L. Russell saw 50 to 75 greyish/white metallic disk like shapes to the north northwest about 30º ­ 40º elevation in random arrangement within a circular formation covering area of only 1 Full Moon, hence each object probably less than 3 arcminutes would have been too small to resolve disk like details.

Objects would flash in unison every 12 to 15 seconds for a period of 2 seconds, as if tilting on horizontal axis.

After 2 minutes cluster became less dense in the center, and more dense at the outer rim.

Formation estimated at distance of 15 to 25 miles, hence height about 50,000' moved upwards in elevation by about 5º and laterally by 10º to 15º until disappearing by fading into distance.

Possible shattered plastic fragments of Skyhook balloon fluttering in the sunlight was an explanation.