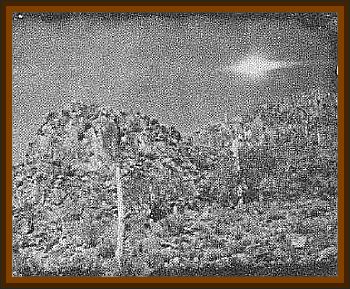 The story of James Cooke entered in UFOlogy literature by the good care of English eccentric Brinsley Le Poer Trench, Earl of Clancarty, who reported about it in the Flying Saucer Review in 1958.

It was picked up later by journalist/paranormalist John Keel who loved this kind of twaddles, but no serious ufologist put it forth as an authentic encounter with extraterrestrials.

The fact is that the American so called contactee George Adamski had made followers, and much more people than it is generally thought, in the 1950s, also invented stories of their visits of some home planet of space men, almost invariably bringing back an assuaging message of universal peace and warnings in connection with the madness of the men.

Cooke’s story, like quantity of similar stories, obviously and with reasons, was not believed by the serious ufologists of his time, thus, almost forgotten, it survives nowadays as an example in the so called skeptic UFO literature, aimed at pointing how silly ufology and extraterrestrial encounters are supposed to be, and also remains as a case to illustrate weird thesis of the Keel/Vallée school of though, which asks to view it not just as a then fashionable fable, or attempt at getting publicity, or imaginary starting point for UFO cults, but as interventions of some generally undefined superior or evil earthly intelligence of some parallel world or other realm, supposed to manipulate the very fabric or reality.

James Cooke, a resident of Runcorn, Cheshire, England, had already told several alleged flying saucers sightings, when he became part of the contactee crowd by claiming that on September 6, 1957, he received, by telepathy, the injunction to go to the top of the hill of Runcorn, which was opposite the city of the same name, and said he did just this, in the middle of the night, 2:15 a.m. on September 7, 1957.

His history is that there, he saw a spaceship in blinding light arriving, coming to hover a few inches above ground level at some 60' in front of him, or less, according to certain sources.

The apparatus changed colors from blue to white, then blue again, then dark red. A slope or staircase with balustrade emerged from this saucer, and a voice told him to enter, by jumping over the ramp without touching it, for the ground was wet of rain.

Cooke, hardly startled, willingly did so, thus this case is not the first alien abduction in England that some writers thought it was.

Inside the craft, a strong light reigns, without shade, coming from everywhere at the same time, with no visible source. He is commanded to strip himself naked, does so readily, then asked to slip into a kind of plastic suit. He then went into another spaceship that had to be there somewhere, and inside, met a crew of more than 20 men of space, similar to the men, but much taller than 6' in height, with well built bodies, black hair, blue uniforms.

As usually in such stories, these people take him along in a saucer trip towards their planet of origin, Zomdic, orbiting another star or another galaxy, depending on ufological sources. He visits Zomdic, describing its vegetation as yellow instead of green, and the residents hermaphrodites, not bisexual as it will be reported later.

Zomdic is governed by Wise Seniors, a Master, and as it should be, Cooke would come back from his visit with a teaching to propagate to Earthlings:

The inhabitants of your planet will upset the balance if they persist in using force instead of harmony. Warn them of the danger.

Brought back home 45 hours after his departure for Zomdic, Cooke thought to make his story sound more true to specify than he forgot to jump over the saucer’s ramp as requested when boarding, which caused him an electric shock, the vessels of Zomdic function by electrifying the air, and this is besides the reason why they do not function well in wet weather and why your are not supposed to touch the ramp when the air is damp, Zomdiciens could however think of insulating the ramp, if they are so wise. As a physiological proof, he claimed that others saw the burns that this caused on him.

A little dubitative, he indicated, as for the chance of success, or perhaps as of the relevance or the interest of the extraterrestrials’ preaching, reassured by the space man,

Cooke then set up The Church of Aquarius, a UFO cult having its Church in Runcorn. He sat there as a messenger and ambassador of the space men of Zomdic, receiving by telepathy their wise words of peace for the benefit of an audience about which John Keel told it was so numerous that he had to open a second Church in the city, the story not specifying if he was gifted of bilocation to sit there too.

It is claimed that this UFO cult lasted 10 years there, and that Cooke disappeared in a puff of mystery according to certain sources, or quite simply made himself forgotten, the public interest in the contactees had waned at the end of the 1960s, and it was certainly a wise inspiration of his to disappear from public view.