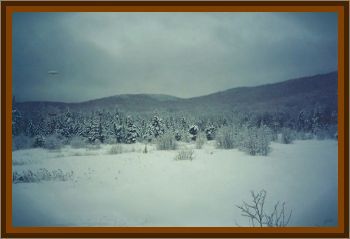 Stinson Lake, proximate to a U.S. army training area, may be an alien or government UFO base, or a focus of investigation or travel by aliens, one reason being possible mining as the area is rich in precious minerals. A mirror ship was photographed directing a beam of light at the hillside.

Two questions that come to mind are:

Why was it at an army operations area?

The author was given a photo one night of an object, above the snow covered evergreens in the soupy late afternoon February sky of 2000 at Stinson Lake. It is not a painted object such as blue underneath and white on top, or black, or part metal and paint. It's like a mirror reflecting the milky white sky above and the forest below, color for color, tone for tone, hue for hue with intensity above surrounding fields at nearest equator and diminishing below surrounding fields, slightly faded at outer or left and right edges, undeniably displaying a round or roundish shape. There are no wings, no engine noise according to the photographer. There is a shadow outlining its shape in a clearing below it and the same shadow is on the underside reflection. There's more.

After closely examining the object utilizing digital enhancement techniques, globes are seen underneath with hints of green and white lights, a possible dome on top which almost completely blends in with the sky and globular energy field where there are color shifts in the pixel spectrum where there are no added colors but a reorganization of existing colors suggesting a mirage effect also seen with the Mexico videos. The shifted field forms a perfect globe around the object exactly touching is outer edge no matter the attitude of the craft. Sitting back a little from a 600% enlargement on the monitor screen, a field net effect is obvious. The field appears webbed like a fish net formed into a globe and transparent white. Further, there is evidence of a beam of light pointing at a dark round spot also in a clearing on a nearby hill. Above the object is a mushroom shape distortion similar to the globular energy field but larger, which raises the question of the portal of origin, or a second ship. It was so sudden, the photographer never had any indication of what was about to transpire as he shot landscape photographs in the otherwise peaceful environs around him.

The photographer happened to be at the site near where the U.S. Army has historically conducted paratrooper and other training. The Armys conventional presence may well have been replaced by something extremely advanced. But the sightings have not diminished in that remote and tranquil location unlikely to be stumbled upon by any tourist.