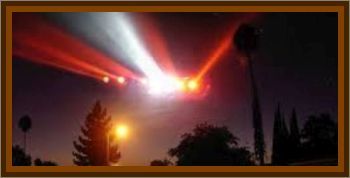 I thought it was a burning plane. It was all orange and it seemed to be on fire. I started to worry that the sparks it was dropping might set houses on fire. But then, when it seemed to be falling, it just turned and disappeared. It was traveling fast. Too fast to be a plane.

This is the startling account of a New Westminster woman's sighting of an unidentified flying object.

It appears that the Royal City has its own private UFO. Eight detailed accounts of the same apparent sighting have been filed since the weekend. The stories began pouring in following a Columbian account Monday of a sighting in the 900 block Laurel Street last Saturday evening by a group of teenagers.

The stories are shocking in their similarity.

Of course I wasn't alone when I saw this. My 21 year old daughter Elizabeth saw the thing first. Then we all ran outside, my husband George and my 16 year old son Philip. We put the binoculars on it but it was so bright that we couldn't make out any details. It was just like a halloween sparkler dropping bits of flame. That's why we thought it might be a burning plane.

She said the object, about the size of a small plane and sort of basket shaped, hovered high above Terry Hughes park in the Eighth Avenue McBride Boulevard area, for about 15 minutes.

When we were convinced that it wasn't a plane or copter, Mrs. Barrett continued, We thought it might be a meteorite, but it didn't act like one. It had no tail, it was flying too low and it was traveling too fast.

After the object disappeared from sight, the Barrett family drove into Terry Hughes park.

We were a little worried, she said, but we were curious. My husband shone his headlights all through the park, but we didn't see a thing.

Well, the earth doesn't have a monopoly on the universe. It's very possible that there is life on another planet. Do I believe that what we saw was a space ship? I wouldn't want to think so.

While the Barrett family's sighting occurred on Friday evening the others were reported to have occurred at about 8:00 p.m. Saturday.

City parking officer George Gracey reported the same apparent UFO sighting from his home. In a rough drawing, he described the UFO as basket shaped with flame and sparks spewing down from a bulbous projection in its underside.

It was a bright orange color, he said, It hovered in the air for a few minutes then vanished at a tremendous speed.

There seemed to be flaming pieces falling away. It was a very bright orange color. It just hung in the sky. It didn't move for about 5 minutes, then it just suddenly disappeared.

Mrs. Fox said a group of about eight people watched the object in front of her home. She said the UFO hung in the air down in the Eighth Avenue McBride area.

It was about the size of an airplane she added, but it was hard to make out any details.