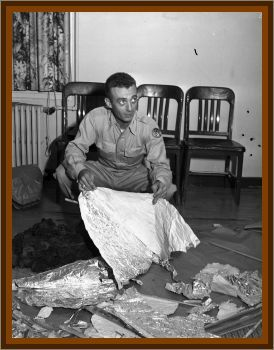 The Roswell Crash is also known as The Crash at Corona, because Corona, NM is about 40 miles closer to the crash site than Roswell. However, the crash debris was taken to Roswell Air Base, hence the name Roswell.

In early July, W.W. Mac Brazel, the Foreman of the J.B. Foster Ranch rode out to check his sheep after a night of intense thunderstorms. Mac Brazel discovered a large amount of unusual debris scattered across one of the ranchs pastures. He took some pieces of the debris, showed them to some friends and neighbors and eventually contacted Chaves County Sheriff George Wilcox. Suspecting that the materials described by Mac Brazel might be connected with military operations, Sheriff Wilcox notified authorities at the Roswell Army Air Field, subsequently renamed Walker AFB, for assistance in the matter.

The Ballard Funeral Home in Roswell had a contract to provide ambulance and mortuary services for Roswell Army Air Field. Glenn Dennis, a young Mortician who worked for Ballard Funeral Homes, received several phone calls from the Mortuary Officer at the air field prior to learning of the recovery of the wreckage. Glenn Dennis was asked about the availability of small hermetically sealed caskets and for his recommendations on the preservation of bodies that had been exposed to the elements for several days. His curiosity aroused, Glenn Dennis visited the Base Hospital that evening and was forcibly escorted from the building. This behavior only incited Glenn Dennis curiosity and he arranged to meet a nurse from the Base Hospital on the following day in a coffee house. The nurse had been in attendance during autopsies performed on several small nonhuman bodies. Glenn Dennis kept drawings of aliens that the nurse had sketched on a napkin during their meeting. This meeting was to be their last and Glenn Dennis could learn no more about the alien bodies, as the nurse was abruptly transferred to England within the next few days.

On July 9th, the Roswell Daily Record revealed that the wreckage had been found on the J.B. Foster Ranch. Mac Brazel was so harassed that he became sorry he had ever reported his find to the Chaves County Sheriff.

In the following days virtually every witness to the crash wreckage and the subsequent recovery efforts was either abruptly transferred or seemed to disappear from the face of the earth. This led to suspicions that an extraordinary event was the subject of a deliberate government cover up. Over the years books, interviews and articles from a number of military personnel, who had been involved with the incident, have added to the suspicions of a deliberate cover up.

In 1979, Jesse Marcel was interviewed regarding his role in the recovery of the wreckage. Jesse Marcel stated, It would not burn, that stuff weighs nothing, it's so thin, it isn't any thicker than the tinfoil in a pack of cigarettes. It wouldn't bend. We even tried making a dent in it with a 16 pound sledge hammer. And there was still no dent in it. Officers who had been stationed at Wright Field in Dayton, Ohio, where the wreckage was taken, at the time of the incident have supported Jesse Marcels claims.

Dr. Jesse Marcel, Jr., 11 years old at the time of the incident, accompanied his Dad during the retrieval efforts. Dr. Jesse Marcel Jr. has produced detailed drawings of hieroglyphic like symbols that he saw on the surface of some of the wreckage. Dr. Marcel testifies regularly on his belief that a UFO of some type crashed in Roswell.

For almost 50 years, the events that took place at Roswell and the official explanation that followed fueled suspicion of a cover up. The Air Force has always insisted that rumors of alien contact were just that...rumors. But new witnesses have continued to come forward claiming that the Roswell story was true. Of all the new accounts, the statement provided by a man named Glenn Dennis is too compelling to be ignored.

In 1947, Glenn Dennis was 22 years old and just out of college. That summer, he was working at a funeral home in Roswell.

Two days before the UFO story broke, Glenn received a strange phone call from the Roswell Air Base:

That afternoon, Glenn was called to transport an injured airman to the Roswell base. When he arrived, he was surprised to find the base infirmary surrounded by military police. Two ambulances parked at the curb immediately caught Glenn’s attention:

I looked in through the ambulance, and I saw quite a bit of wreckage of some type. It looked like stainless steel that had come in contact with a high degree of heat. It was a purplish-bluish color. I noticed one large piece of the wreckage did look like there was some Egyptian hieroglyphics. The confusion at that day that I was out there was so great, that I don’t think anyone really knew what the other man was doing. Then I don’t think they even knew each other.

I think they were brought in from different military bases or whatever.

According to Glenn, one of the officers told him not to repeat what he saw:

Two MPs came up and said:

Sir, we have to escort you back to your mortuary. And that’s when he said look mister, somebody will be picking your bones out of the sand if you go starting a lot of rumors.

As Glenn was being escorted from the Roswell infirmary by the two MPs, a group of doctors stumbled out of a storeroom overcome by noxious fumes. With them was a nurse, who Glenn recognized. Hoping to find an explanation for the strange events at the base, Glenn Dennis asked the nurse if she would meet with him. The next day, the nurse agreed on the condition that Glenn never reveal her identity.

According to Glen, the nurse told him she was ordered to take notes during an alien autopsy:

They were doing a partial autopsy. There was a crash bag that was open, and there was 2 very mutilated, very small bodies, The head was very large, the eyes were set back, they didn’t have the earlobes or anything. There was like two canals, like two ear canals. There was only two orifices, there were no teeth.”

In all, the nurse claimed to have seen three bodies. She was adamant that none of the bodies were earthly in origin. Glenn never saw the nurse again. A few weeks later, rumors circulated that she had died in a plane crash after being transferred out of the country.

To this day, Glenn remains convinced that the details of her story are true:

The Air Force has claimed that the alien bodies were actually dummies that were part of a parachute test.

Those who participated in recovering alien bodies at Roswell kept silent for years. Finally, as initial reports of the Roswell incident began to appear in the 1980s, they began to confide to close friends or family members what they really had seen.

Even then they were uneasy, still afraid of getting into trouble.

Apparently, judging from what he told his family, he also saw the bodies up close.

Sgt. Melvin Brown rode in a truck with the bodies from the crash site to Roswell Field, then stood guard at the hangar where they were first stored.

Several persons who were at Wright Field or who knew individuals who were, have testified to the arrival of wreckage and bodies at Wright in July 1947.

One of these, retired Gen. Exon, says a top secret committee was formed to oversee the investigation of this and other highly classified UFO incidents.

Nearly 20 years later, when he took command of the base, the committee was still operating. It had nothing to do with Project Blue Book, the poorly funded, inadequate project that apparently served little more than a public relations function. As Brig. Gen. Bolender had indicated in an internal Air Force memorandum: UFO reports which could affect national security, are not part of the Blue Book system.

Echoes of the Roswell incident have been heard for decades in popular folklore about secret rooms and buildings at Wright Patterson AFB where government personnel study physical and biological proof of alien visitation.

Most, but not all, are friend of a friend tales.

Retired Wright Patterson employee Norma Gardner stated before her death: Uncle Sam can't do anything to me once I'm in my grave. She claimed to have catalogued UFO material, including parts from the interior of a machine that had been brought to the base some years earlier. She also said she had typed autopsy reports on the bodies of occupants; once, moreover, she saw two of the bodies as they were being moved from one location to another.

From her description, if she was telling the truth, she saw the Roswell entities.

In the mid 1960s Sen. Barry Goldwater, a brigadier general in the Air Force reserve, asked his friend Gen. Curtis LeMay about the rumors. Goldwater told The New Yorker, April 25, 1988, that:

LeMay gave him holy hell, and warned him never to bring up the subject again.