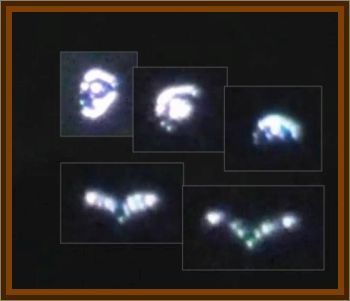 At about 9:30 p.m. policemen at Middleburg watched a strange glowing object through binoculars. It appeared to change color, and its shape went from circular to elliptical.

They said the light hovered over a hill at Rosmead, then disappeared and reappeared.

A while later, the principal of Rosmead School, Mr. Harold Truter, was just arriving home when he saw a beam like a searchlight, in the sky and he and his wife and children watched it for some time. He then discovered that chunks of tar had been gouged from the school tennis court near his home.

The next morning, he made a closer inspection and found that there was no damage to the fencing around the court and that the gate was still firmly secured with wire as it had been before the object was seen. He thought it significant that lumps of tar were found caught high up in the tennis court fence.

On the 13th, police who were searching the area found lumps of tar on a hill some distance away. Lt. Col. B.J. van Heerden, district commandant of police at Middleburg, stated that the reports on the object from his men tallied with those of the UFO seen at Fort Beaufort earlier in the year. As the investigation continued, it was found that a tree next to the tennis court at Rosmead High School had started to die. It was a large blue gum tree which showed signs of scorching, according to van Heerden.

Theories were advanced that the 10' to 12' chunks of tar which had been ripped up from the court's surface were caused by a gas explosion or a whirlwind, but were discounted because not a piece of tar had been overturned and the other trees in the vicinity had not sustained any damage. After the news about the mysterious damage was reported, 4 men who had been guarding the petrol dumps 1300' away on Sunday night made independent statements to the police that they had observed red lights on the court.

It looked as if someone in a car without headlight, but with tail lights burning were riding around in circles on the tennis court, they told police. The lights disappeared, they said, and then the whole petrol dump was illuminated with a strange incandescent light. Riflemen P.K. Nel and S.J. Rosseau said that the lights were on the court and not next door.