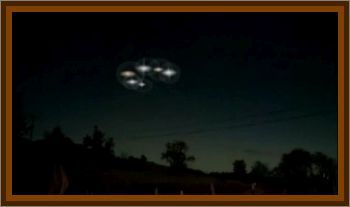 I was thirteen I believe, so it must have been around spring 1984.

I had been in bed. I woke up to a lot of commotion, voices. I could hear my mother and brother speaking very animatedly. I walked out to our kitchen, and they were standing out on the porch. I looked out of the porch door, which faces west. I saw a family we were friendly with, they lived one town north of us, standing on the porch with my mom and brother, they were all talking to each other in an excited manner.

I was surprised to see this family on our porch so late at night. They were all looking up into the sky. I walked out of the door and noticed as I was looking west, towards Route 32, that there were cars all stopped along the road, including police cars, ambulances and firetrucks. Everyone was outside of their cars and looking up in the sky.

As I stepped onto the porch and turned to look southward, towards the Rondout Creek, I saw a large object in the sky above us. It is difficult for me to remember now, as this happened 21 years ago, but I recall lights, and black space between the lights, and an edge that wasn’t distinct. I thought: That’s got way more lights than a plane. The lights were colorful and pulsey, not entirely pulsating, but with a pulsating quality. Also, The size of it was enormous.

It didn’t make any noise, and it moved excruciatingly slowly until it seemed to hover over the intersection of the Rondout Creek and Route 32. I could hear the family of friends that were with us telling my mom and brother that they had followed it, but I don’t know from what direction they had followed it.

The object began to move slowly northwards. Many people, including police and emergency personnel, jumped into their cars to follow it. My mom was eager for me to return to bed. The next day was a school day. That part always strikes me funny, because although I was very agitated about what I had seen, I didn’t have any trouble going to sleep. The next day, at school I remember talking about it in class a few times, asking if other kids had seen or heard about it. Some had.

I know that the next day The Kingston Daily Freeman reported a story about the sightings, because apparently they had started quite a bit south of us and continued up to the north, and a lot of people were involved. Lots of policemen had made reports, along with other reputable citizens.

However, the day after that The Kingston Daily Freeman reported that they had been told by military officials down in Newburgh that it had only been helicopters flying in formation. I remember thinking that that many helicopters would have made a huge amount of noise and wind. Everyone who was on my porch remarked about how quiet it was at the time we were watching it.

A few years ago, we were at a gathering with the same family of friends who had stood out on our porch watching with us that evening. I said: Hey, do you guys remember the UFO that everyone saw that time? They nodded, but no one remarked further and my mom seemed embarrassed by my candor, so I didn’t push the issue. Sometimes I wonder if it was a dream, but I know that the newspaper wrote about it twice after the fact, so I couldn’t have just dreamt it.