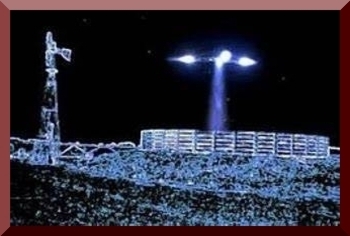 The sounds of frightened cattle woke a farm worker named George Blackwell, from a sound sleep aroun 1:00 a.m., near Rosedale. When he went outside, he was astonished to see a domed disk with orange and blue lights gliding about 10' above the ground. It rose slightly in the air, hovered briefly above an open 10,000 gallon water tank, and then landed 50' away. He jumped on a motorcycle and sped toward the object, which was making a whistling sound. The surface of the object was dotted with orange and blue lights that might have been round windows. But the weirdest feature was a moving black tube which inflated to a size bigger than the UFO itself. An awful scream sounded as a black tube extended from the UFOs base. With an ear splitting bang the strange craft rose into the air. A blast of hot air almost knocked him down.

The sounds ceased as the object slowly moved to a position about 30' away and 8' above the ground. Hovering briefly, it dropped debris, stones, weeds, cow dung from underneath it, then flew away, disappearing in the east.

Where it had landed could be found a ring of black, flattened grass 30' in diameter. When he examined it in the daylight, he discovered that all the yellow flowers within the circle had been removed. Only green grass remained. But even more bizarre, the water tank was empty, with no evidence of spillage. Only the muddy residue at the bottom of the tank was left, and there was something peculiar about even this, It had been pulled into a 2' high cone shape.

He noticed his 6-7 year old, water resistant, stainless steel Taiwanese spring wound Timex watch had stopped at 1:10 a.m. He took it off his wrist and placed it on the table. After a few minutes it started again. However, when he put it on his arm it stopped again within 10 minutes. This sequence of stopping on arm, and going on table, happened on and off over the next three days, then the watch returned to normal. He commented that the watch had been reliable before and had been since. He was sick with headaches and nausea for more than a week afterward.

A similar ring was found the following December at Bundalaguah, not far from Rosedale. The water in a nearby reservoir was also mysteriously missing.