Invited Aboard and Healed 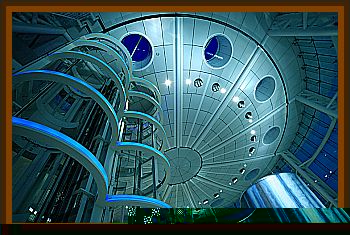 Retired couple William and Rose Shelhart experienced a missing time encounter with a UFO outside of Sedona, Arizona.

As they drove along an isolated road, they saw a light following them. It appeared first ahead of behind them, as if playing a game of hide and seek. The light zoomed down out of the sky and landed into a field next to their car. The couple promptly lost consciousness. Their next memory was of stumbling into a hotel hours later.

Realizing they had experienced missing time, they underwent hypnosis during which they recalled that they weren't abducted, but were invited onboard.

We weren't kidnapped or abducted. We voluntarily boarded and we were welcome. We sought them out and we climbed aboard, not being abducted as in force.

Rose was surprised at the appearance of the ETs.

They looked a lot more like people than some of those sketches do. A lot more. Their eyes were a little larger than any white person's big eyes would be, but they were just not enormous. They looked like they could pass for us if they wished. And they glowed with a blue aura which made me feel reassured, kind of on a mental level, that they were peaceful.

Rose was also surprised by their clothing.

Something like a military outfit, but not anything I have ever seen, and I've been in Europe and here and so forth. But it would resemble that because they were all alike, but more loose fitting, but with belt. Uniforms, but it looked structured more like, I mean business.

Another surprise was the lack of technological equipment on board.

Oh, there were all kinds of lights, but very few actual gizmos like we have on any aircraft here. It was like they didn't need them. It didn't look like they needed too many things. It's like they almost had mind control to get the thing going. But there were little lights, I guess for monitors and things."

Rose recalled other details regarding the ETs place of origin and their intentions on Earth. William, however, was not a good hypnotic subject and was unable to recall anything other than the craft landing and them being invited onboard.

William had experienced an earlier terrifying episode with missing time, so he was somewhat relieved that their encounter turned out to be benevolent.

Later, William and Rose had another encounter in their isolated home in Hawaii, which confirmed for them that the ETs were interested in their welfare. His first clue occurred upon waking up one morning and finding a strange mark on his body.

I woke one morning and I felt an itch on my right foot and discovered 3 puncture wounds in a perfect triangle. They were in the process of scabbing over. I sleep on a waterbed, so nothing could have scratched it. My wife was the only witness. I felt something itching on my right ankle, and that's when I looked. Because there's no way possible in the night I could have done this, and that's when it happened.

William was concerned by the marks because it was obvious that they were not natural. But what could they be?

The answer came about 2 weeks later when the same incident occurred again, only this time William was awakened by an unexplained bright beam of light entering into his bedroom.

I woke in the middle of the night with a bright light coming in the back window. It lasted about 30 to 60 seconds. I froze and could not get out of bed to look outside. My backyard is a jungle of coconut trees and plants. As I live in the country, no car could get there in that time. When the light came in the back window, it was just as bright as could be. I couldn't believe it, and there's nothing in the back. There's no way a car could have gotten in there. I mean, that's what it looked like, somebody's headlight shining right into the window. I remember waking up and seeing that. This was just kind of shocking thing.

William's first instinct was to get up and investigate. Strangely, however, he found himself paralyzed. Seconds later, he felt himself being put to sleep. When morning came and he awoke, he immediately remembered the incident that had occurred in the middle of the night. He could only shake his head in wonder.

Then he looked down to his right arm and received an incredible shock.

My right wrist was itching. The same thing happened, 3 puncture wounds in a perfect triangle. I woke up and found those triangular pin pricks on my right hand. And this was the hand I used when I carried mail. This was in constant use. And they were very fresh, because you could still see, they had just about scabbed over. I showed them to my wife immediately. I said:

My God! Look at this thing. It's perfect. It's a perfect triangle.

William had worked for years as a postal worker and had developed severe carpel tunnel syndrome in his right wrist, as well as permanent damage in his left ankle. However, immediately following the 2 above incidents, he noticed a dramatic improvement in his health.

I went and got myself a hot tub. I did everything I could to take some of that pain away. And it wasn't until after my incident that things started to get better. I just know that I progressed and started to get better. Since then, I have been 90% cured….I am almost 67 years old and I can hang off a 20' ladder placing the weight on my right foot and paint with my right hand, day after day. I really don't care if people doubt my explanation. I know what I feel.

William and Rose are the perfect example of people who have moved beyond the typical abduction scenario. Not only were they healed, but they have now become healers themselves. This pattern has turned up in other cases.

Both of us have become more and more interested in helping people in alternative healing ways. Even William, he has this energy in his hands that he didn't have before, now it's like I feel this heat coming out that's really good. And people say they feel it out of me too. And I say, Oh, where did I get this from.

I have a lot of good result stories from the neighborhood. But I'm grateful, because I think it, the UFO connection, has a lot to do with it.