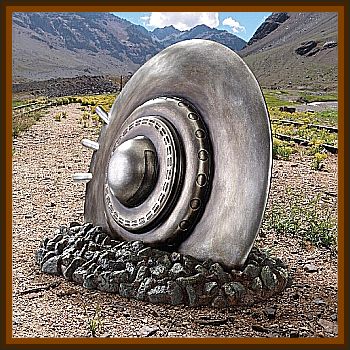 According to some who maintain that the Irish Government have been covering up the crash of an extra terrestrial craft near Boyle, Co. Roscommon, in May 1996.

They have gone to such lengths as even comparing the crash to the alleged cover up of the controversial Roswell Incident of years ago, and they seem to be of the opinion that the Roswell Coverup is established fact, rather than a swamp of glutinous information.

Apparently, this spacecraft got into trouble before hitting some trees and bouncing into a lake. Without a smidgen of an explanation as to how these spacemen, or, as they are called, the Sunasians got their machine working again, This group says they are in regular contact with them using telepathy.

The icing on the fruitcake comes in the form of this wonderful quote:

They are are like humans. In fact we are the aliens to them.

This groups allegations concerning Irish Governmental conspiracies are rather interesting, especially when one considers the spate of dirty laundry which has recently been aired in Dáil Eireann and Dublin Castle.

According to them, an anonymous Boyle Garda, Irish policeman, maintains that the local Gardai were told to keep their noses out of it, by Government officials who were on the scene of the supposed crash.

Over coffee and whiskey last night, author and lighthouse visitor Peter Costello wryly pointed out to that it may have been Mr. Ray Burke trying to sell passports to the aliens.

For those of you who are unaware, Mr. Burke was Irish Minister for Foreign affairs until Tuesday 7th October, when he resigned amid allegations of his having sold passports to wealthy Saudi Arabian bankers in return for $20 million pounds of industrial investment. Incidentally, Mr. Burke was not in government when the Boyle incident took place.

People in Boyle seem to be adamant, if one can believe the Sunday Mirror, that something big happened there that night.

Several U.S. military Jeeps were also allegedly seen in the area, but as some of you may remember, this isn’t the first time that Blather has discussed the diplomatic intricacies of letting foreign military personnel wander about Ireland, officially or otherwise.

In fact, this isn’t the first time I’d heard about the Boyle Incident either, the tale came to my notice via the grapevine almost a year ago, and supposedly propagated by an anonymous Boyle Garda, presumably the one mentioned above.

It told of something crashing, pieces of debris everywhere, the general area being overrun by the security forces and the arrival of a few large cars, supposedly containing unnamed politicians and U.S. embassy representatives.

I heard no more about it, but the story did get around, and with surprisingly minimal embellishment, until 3 weeks ago, when the Mirror got hold of it.

So, if anything happened, what could have happened? Let us, for a start, discount the extra terrestrial hypothesis, and consider the implications of something even as trivial as a drop tank from a U.S. military aircraft falling on Irish soil.

This might drag Ireland’s so called neutrality into question, hence the presence of politicians, U.S. embassy officials etc. at the crash scene. It wouldn’t be the first time that something of this nature has taken place, even without the inclusion of any cross border trespasses in the cauldron of conspiracy.

Many years ago, a large object buried itself in the side of one the Wicklow mountains, in eastern Ireland. It was mentioned on early morning radio, and it was hypothesised that some sort of of unmanned drone had wandered out of a British military testing area in the Irish Sea. Some British officials allegedly appeared and took it away with them, and not another word was heard. Or so the story goes.