Object With No Wings Or Tail Fins 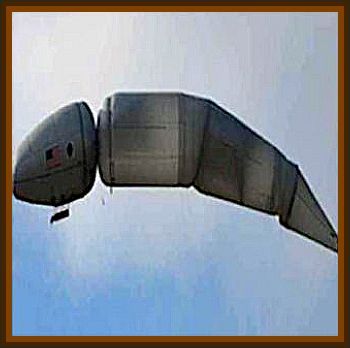 Having just arrived home from a holiday in Brittany, I had to write to someone to report what myself and my family saw whilst driving to our ferry departure at Roscoff.

We were progressing along the D69 close to Lambader not far from Roscoff, when my wife spotted what she thought was a passenger airliner flying east to west across our path of vision, if this aircraft was the same size as a typical airliner I would estimate it’s height to be about 5,000' to 10,000' traveling at about the same speed as a typical aircraft would at that height.

The problem with this craft, was that there appeared to be no wings or even tail fins, it was pure white, but we couldn’t actually decide if this was the sun shining on a silver fuselage, as the sun at this time of day was very bright and behind us at that time, the weather was perfect with no cloud cover and blue sky.

The shape of the object in question appeared to be the shape of a fuselage only, rounded at the front and less so at the rear, it’s direction omitted the possibility that the craft was at an angle that would obscure it’s wings or tail fins from us.