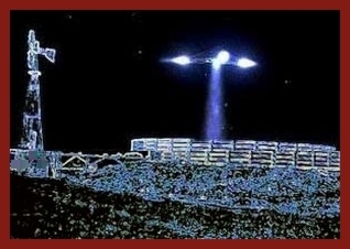 A farmer from Rosario who visited a farm in the Province of Entre Rios claimed having seen a UFO while in the company of both his son and the owner of the El Rancho rural facility. The curious event took place last Saturday some 14 miles from the town of Federal and some 250 miles from Rosario.

This is not the first time the witness has seen a UFO, although he acknowledges that this time he was very scared. The man, who asked to be kept anonymous, has a potato stand at the Mercado de Concentración in Fisherton and when he has time, he visits a friend who owns a field in Entre Rios.

I travel frequently to Entre Rios because of my job and I made great friends. This is the fourth time that I’ve seen strange lights in the skies over Entre Rios, but never so close by. To clear my head a little, I went to El Rancho this weekend with my son Guillermo. What we both saw, along with the field’s owner, left us stunned, he admits.

Luis added that as they took some things out of their truck, the saw a light approaching in the distance.

It was 9:00 p.m., and we were taking some things out of truck to go into town for fuel. We saw a light approaching us and we told the owner of the property, whose name is Guillermo Jorjato, if he was waiting for someone. He said no. The light was coming through the middle of the field and not along the road. We stood there watching, to see what it was.

Some 1000' away from us was a windmill and an Australian water tank with a capacity of 33,000 gallons. When the light reached the tank, it rose and remained suspended overhead. We could clearly see that it was a vessel shaped like an inverted platter. It was twice the size of the tank. I figure some 90'. It had red, green and gray lights that rotated but made no sound. My son wanted to run into the house for a shotgun to fire at the vessel, but I stopped him. What good was such a weapon against that display of technology?

At that time, the property owner told Luis that he had never seen lights nor anything similar, but that he had on several occasions found the tank empty overnight, without finding traces of tire tracks or any water spilled in the vicinity. After a brief while suspended over the tank, the device went straight up at an impressive rate of speed. We only heard a slight sound, but a sound of friction, not of a motor, like a prolonged Zzzz sound. When it reached a certain altitude that I cannot imagine, two small explosions were heard, like rockets. I suppose this happens when the sound barrier is broken, he reflects.

The next day we went to see the tank. It was full of water. We don’t know why they didn’t take the water this time. They must’ve read my son’s mind and felt afraid. Luis said ironically, although he admits to having trembled like a leaf at the moment.