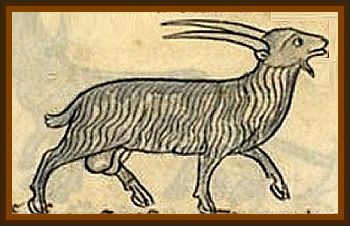 The Italian inquisitor Paulus Grillandus, whose Tractatus de Hereticis et Sortilegiis had almost as much impact as the Malleus Maleficarum, wrote that a countryman in Rome saw his wife take all her clothes off and go out of the house.

The next morning he asked his wife where she had been all night. At first she refused to tell him, but when he started to become more aggressive she told him she went to a witch gathering.

He demanded that she take him with her the next time, and not long after this they were both transported by 2 he goats. However, she warned her husband not to pronounce the word God during his time with the demons, to which he agreed. The man saw many famous people at the meeting, all of whom declared their devotion to the Devil in a ceremony.

There was a dance and a banquet. The man noticed that the food on the table lacked salt. Of course, salt has purifying qualities associated with warding off evil spirits and was therefore shunned by demons and fairies alike.

The man was unaware of this fact, much to his misfortune. He asked for the salt and, when he thought he had it in his hand, exclaimed:

Thank God, the salt has come.

Suddenly, everything disappeared before his eyes. Men, women, tables and dishes evaporated and everything went dark. He found himself naked in the countryside, in the cold night. At dawn he met some shepherds who informed him he was near Benevento, some 100 miles from Rome. They gave him something to eat and clothes to wear, and eventually he found his way home, begging for money on the way.

When he reached Rome, starving and exhausted, the first thing he did was to report his wife, who was forced to confess and promptly burnt at the stake. Medieval demonologists, similar to today’s abductionists, could be divided into 2 broad groups, the skeptics and the true believers.

The sceptics regarded the whole subject of transvection as a mental illusion that gave a person the sensation of being lifted bodily by devils and taken through the sky. There was no need or precedent for complex psychological theories as such illusions were generally attributed to dark Satanic forces. In fact, it was heretical to think otherwise:

The act of riding abroad may be merely illusory, since the devil has extraordinary power over the minds of those who have given themselves up to him, so that what they do in pure imagination, they believe they have actually and really done in the body.