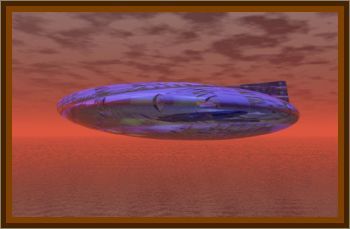 The sighting is important because of the quality of the observations by the several observers, and because the witnesses reported the sighting only to their local security agency, and to the AFOSI.

During the afternoon of May 24, 1949, five people, 3 men and 2 women, were fishing in a boat 2½ miles from the mouth of Oregon’s Rogue Riven At about 5:00 p.m., they were scanning the river with 8x Navy binoculars looking for signs of jumping fish, when they first noticed a strange circular object approaching from the northeast. They watched it for about 2½ minutes as it hovered east of them before it departed at high speed in a southward direction. The sky was clear and the afternoon sun was at their backs. To the naked eye, it appeared shiny and shaped like a coin with the flat surface parallel to the ground. At its closest it seemed to be only a couple of miles away and about a mile high. They heard no noise.

Two of the witnesses, a draftsman and a wind tunnel mechanic, were employees of the Ames Research Laboratory at Moffett Field, south of San Francisco.

These two men shared the binoculars. Each man had about a minute to look at the object through the binoculars. The men observed that the object was circular and thin relative to its diameter, with a shape similar to that of a pancake, and with some sort of a vertical fin on the upper surface at the trailing edge. They could see no wings, no antenna, no lights, no propellers, and no jet engines.

According to the AFOSI report:

Just before John Doe, name censored in the publicly available copy of the original Air Force document, handed the glasses to John Doe Jr., the object made a turn on its vertical axis with no tilting or banking. The trailing edge of the object as it traveled appeared somewhat wrinkled and dirty looking.

The trailing edge looked wrinkled and dirty, but there were no exhaust ports. Then they saw it speed off in a southeasterly direction, accelerating to the approximate speed of a jet plane, in a few seconds without making any noise.

About three weeks later the Ames employees reported their sighting to the security office at Moffett Field.

The security office then requested that AFOSI agents investigate the sighting.

In 1952, Project Blue Book hired the Battelle Memorial Institute of Columbus, Ohio, to carry out a statistical study of flying saucer reports that occurred between 1947 and the end of 1952. The main intent of the study, called Project Stork, was to determine whether or not there were consistent differences between sighting reports that were explained and those which could not be explained as mundane phenomena. To carry out this study, the Battelle scientists, working along with the Air Force personnel at ATIC, first analyzed each sighting to determine whether or not it could be identified. The scientists were able to do much better in explaining sightings than the Air Force had done in 1948 and 1949, they were able to explain about 70% of the 3,201 sightings they studied. About 10% of the sightings had too little information for a positive identification. However, about 20% had sufficient information for identification, yet resisted explanation. Of these they found a dozen they considered the most descriptive of the sighted phenomena. The Rogue River sighting is the best of that dozen. The two main witnesses were technically trained and, as nearly as can be deter mined from the case file, thoroughly reliable. In the final report of the study, called Project Blue Book Special Report Number 14, the scientists included two rough sketches, based on the verbal descriptions of the Ames employees, showing two views of a circular object with a thickness much less than its diameter, no wings, no tail, and no engine, but a wrinkled outer edge.

The object’s description by the witnesses is very clear:

It was neither an ordinary aircraft nor a hallucination. It either was a hoax or the real thing, a flying saucer. Could it have been a hoax? Experts would say unequivocally no, because the two Ames employees reported their sighting to the security officer at Moffett Field. A hoaxer might report a sighting to the press, radio, or TV, but no person of reasonable intelligence whose job depended upon holding a security clearance would try to hoax the security officer at their place of employment. Furthermore, there is no evidence that this sighting was ever mentioned in the popular literature. Apparently these witnesses reported the sighting to no one but the Ames security officer. The security officer then requested an investigation by the AFOSI. The AFOSI investigators interviewed all of the witnesses once, and interviewed the Ames employees a second time. The interviews established the high degree of credibility of this sighting.

The Project Blue Book microfilm at the National Archives is supposed to contain all the records collected by the Air Force. In that microfilm two sightings are listed for May 24, 1949.

One sighting, case number 402, is explained as aircraft.

The second sighting, not numbered, is explained as kites?

The second sighting is not numbered because, according to a handwritten note, the cards are missing. This means that the copy of the AFOSI investigation report, which originally was sent to Project Grudge, had been removed from the sighting file by someone many years before the file was microfilmed and released in 1975. Fortunately, the original AFOSI investigation report was not kept at Blue Book headquarters, but rather at the headquarters of AFOSI, so when the Air Force released the combined AFOSI and Blue Book records to the National Archives, It was possible to find the record of this case investigation in the AFOSI section of the microfilm.

How did Project Grudge personnel explain this multiple witness sighting, you may ask? First, accidentally, or intentionally, they divided it into two parts and treated each separately. The sighting numbered 402 in the master case list contains the interview of one of the two women. According to the AFOSI report, this woman was interviewed on August 8, the last of the witnesses to be interviewed.

The report, in part, read:

At approximately 1700 hours, 24 May 1949, she and four other persons, while fishing on the Rogue River near Elephant Rock, approximately 1½ miles above the highway bridge near Gold Beach, Oregon, sighted an object described as being round in shape, silver in color, and about the size of a C-47 aircraft. when first brought to Jane Doe's attention by one of the other witnesses, the object appeared to be three or four miles away. It was coming from the east but later turned to the southwest. It appeared to be traveling at the same rate as a C-47. It made no noise, left no exhaust trail, and made no maneuvers. The interviewee stated that she was not familiar with aircraft, therefore she could not estimate with any accuracy the speed or altitude at which the object was traveling. Jane Doe made the comparison between the object and a C-47 because she is familiar with that type of aircraft. Her son has pointed out C-47s to her as they flew over the Gold Beach.

Based on this verbal evidence the Project Grudge personnel identified the object as an aircraft because:

No data was presented to indicate object could NOT have been an aircraft.

The Grudge personnel were able to get away with that explanation only because they:

(1) Ignored her claim that the object was circular.

(2) Treated her description separately from the descriptions by the other witnesses.

In order to explain the sighting by the other four witnesses, the Grudge personnel used information provided by the AFOSI investigator. This man checked airport records for air traffic or anything else that could conceivably have been in the area at that time. There were no known aircraft in the area. However, the agent learned that radar kites, which are balloons supporting thin metallic radar reflectors, were launched twice a day from military radar installations near San Francisco.

He wrote in his report:

These devices are of aluminum sheet, approximately 5' on a side, roughly diamond shaped and containing a double set of triangular fins on the top side. These are carried aloft by gas filled balloons approximately 2' in diameter when they leave the earth. When these devices reach high enough altitude, the expanding gases cause the balloon to burst and the devices known as kites, fold and drift earth ward. It is possible that one of these devices from one of these radar installations may have been blown as far north as Gold Beach, Oregon, on 24 May 1949.

This is where the official kites explanation comes from.

Based on this information it is immediately obvious to the most casual observer that what they saw was a radar kite, right?

Think again. The description given above is sufficient to make it clear that a radar kite is not pancake shaped. Furthermore, such a kite, if traveling through the air would be supported by one or more balloons which would have been obvious to the witnesses since the balloons are about the same size as the kite, and it could have moved no faster than the wind. If the kite were falling because the balloons had deflated, the witnesses would have seen it fall rather than accelerate to a high speed and disappear in the distance.

As illogical as it may seem, the Project Grudge and Blue Book analysts, acting on the behalf of the U.S Air Force, have officially accepted kites as the explanation for the sighting.

However, the Battelle scientists knew better. They did not accept the Air Force explanation.

Another reason to reject the Air Force explanation is:

An errant radar kite launched from the San Francisco area would have had to be carried north northwestward a distance of about 300 miles.

About thirty years after the AFOSI closed their investigation of this case, it was reopened and completed it by obtaining the weather records for the coast of northern California and Oregon. These records show that the winds at all altitudes for the day of the sighting and the day preceding were blowing from the west to the east, and could not have carried a balloon from San Francisco northward to the Rogue River. The AFOSI agent who conducted the investigation of this case could have discovered that for himself in 1949. Apparently he decided to end the investigation once he had found a possible explanation.