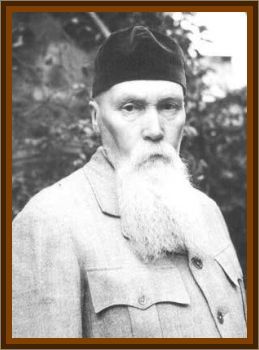 Philosopher/artist Nicholas Roerich who designed the sets and costumes for Igor Stavinsky's first 1913 performance of the Rite of Spring in Paris, was trekking in The Himalayas, when he saw something remarkable.

We were in our camp in the Kukunor, NE Tibet district, not far from the Humboldt chain, some of our caravaneers noticed a remarkably big black eagle flying above us. Seven of us began to watch this unusual bird. At the same moment, another of our caravaneers remarked: There is something far above the bird, and he shouted his astonishment.

We all saw, something big and shiny reflecting sun, like a huge oval moving at great speed. Crossing our camp this thing changed in its direction from south to southwest, and we saw how it disappeared in the intense blue sky. We even had time to take our field glasses and saw quite distinctly the oval form with the shiny surface, one side of which was brilliant from the sun.

Project Blue Book Special Report 14, claims weather balloons were being launched during this period and may provide a possible explanation for the UFO.

Roerich also claims that there are caves in the Himalayan foothills that have subterranean passages. In one of the these passages, there is a stone door that has never been opened, because the time for its opening has not yet arrived.