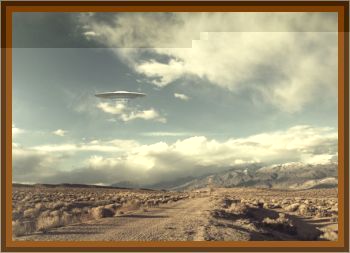 Friend & I retuned home from movie. We lived on a hill that over looked the desert. I looked out to the southwest and saw this object and said to my friend look at that, and it left the ground and disappered almost straight up before he could turn and look at it.

The craft was round with a dome on it. It was like a soft white color and had like portholes around it. It wasn`t far off the ground. As the crow flies it was about ¾ of a mile away. It was a clear summer night with no obstuctions in the way of viewing. It left the spot with no sound and went out of sight staight up in just a matter of seconds and out of sight.

Over the years I have seen simular pictures but not the one I saw. The one that comes close to it is the picture of the one in McMinnville,OR.

About one week later about three in the after noon four of us were playing basket ball and looked up to get a rebound and there were 3 disk like objects in the sky in the formation of a > again no sound and were flying around the height of a plane. They were a medium gray color and just went across the sky about the speed of a commercial jet would now days.