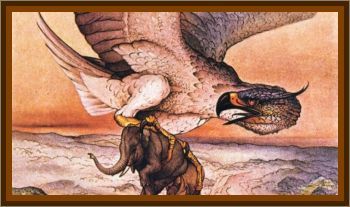 The Roc bird, from Middle Eastern Legends was described to be a gigantic eagle.

In ancient mythology the Roc or Rukh was an enormous bird of prey reportedly large enough to carry off and eat full grown elephants. Usually described as a white colored bird, its wingspan was reported to be an amazing 48' in length complete with feathers as big as palm leaves.

The Roc was so big that its eggs were said to be over 150' in circumference and according to Arabic Tradition the creature would only land on the mountain Qaf, the center of the world.